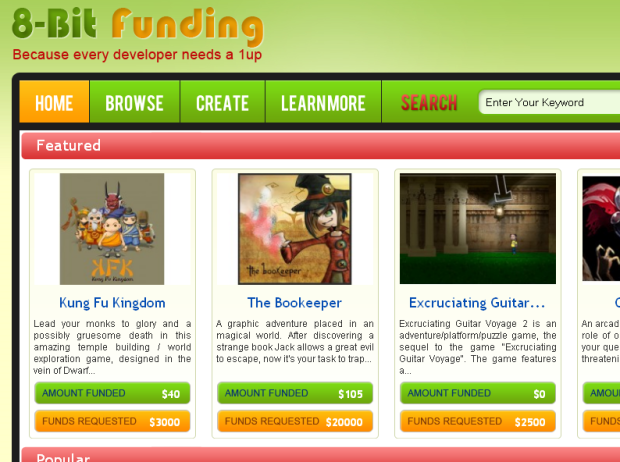 We’ve had a few posts on Kickstarter projects on CrunchGear lately, mainly because we think it’s a great way to bring attention to what we think are interesting and innovative hardware projects. However, one thing that doesn’t get a lot of love on Kickstarter is games. Things like Minecraft have their own financial momentum, but it’s hard for an indie developer to get the idea out there and garner a few bucks to fund early development. 8-Bit Funding is an attempt to create a site where that can happen.

I mention it mainly because I’m a fan of indie games, but also because I know our readers appreciate real new ideas when they see them, and sometimes may even want to throw a few bucks in that general direction. Right now the site is still being put together and the bugs being worked out, but hopefully in a few months it’ll be populated with lots of developers’ projects and goals, so they won’t have to rely as much on that lonely “donate” button on their personal website.