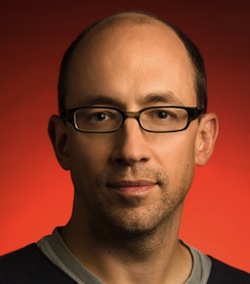 Tonight at our Crunchies Awards in San Francisco, Twitter CEO Dick Costolo took the stage with our own Michael Arrington. The topic of discussion? Well, it was sort of all over the place — more of a fun conversation.

Mike asked Costolo what he thought about the recent news that Eric Schmidt was being replaced as CEO of Google by co-founder Larry Page. You’d think Costolo would have some insight about the news simply because he himself just took over as CEO of Twitter, replacing Ev Williams, a co-founder (who also stayed with the company).

“Eric is on a bit different of a plane than me. I mean in the Gulfstream sense, not the other sense,” Costolo joked. “I think he’ll be fine,” he continued to laughs. “I think it’s going to work out for him.”

Mike quickly pivoted. “So far Twitter has been too cool for revenue. Is this the year there might be revenue?,” he asked. “There must and shall be revenue,” Costolo said with a laugh. He quickly corrected himself — “There already is revenue. There will be more revenue,” he said. “The next year, more still!,” he joked.

“We are focused on it,” Costolo continued saying that they have many products built for that purpose now. “That’s not one of the things I worry about,” he continued.

Naturally, Mike followed up with “So what do you worry about?” “International growth,” Costolo quickly replied. “You have to scale lanuages, regional support, data centers. Organizing all of that is a challenge,” he continued. “And not many [companies] have had to do that before,” Costolo said noting that it’s not like there’s a book on how do it.

Costolo also said that he was a Twitter user before all “the cool kids” signed up at SXSW in 2007. When Mike asked if Costolo knew then that this would be a good company, Costolo admitted that he did not. “I didn’t really get it.” That said, he still angel invested in it.

“Do you get it now?,” Mike quipped. Costolo laughed. “It continues to evolve.”

You can continue to watch the show live here.