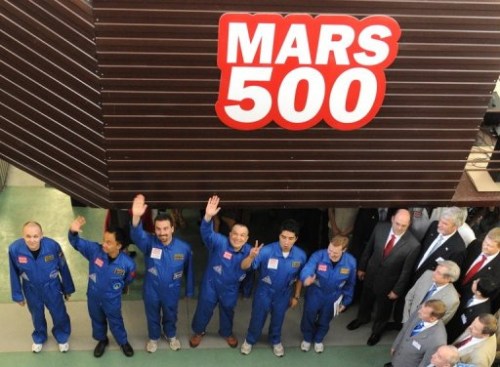 We need more stories like this next one. A crew of six researches has been locked inside a “steel capsule” (presumably not the Elimination Chamber) for an astounding 520 days on a mock mission to Mars. The point of the mission is to study how long-term spaceflight affects the human mind and body. Do people freak out like in that episode of Ren & Stimpy? Do they lose a dangerous amount of weight? Things like that. The mission is nearing completion, with the researchers preparing to“land” on Mars on February 12.

The mission, called the Mars-500, is a three-way effort between the European Space Agency, Moscow’s Institute for Medical and Biological Problems, and China’s own space program. It’s an all-male crew. They eat food similar to that found on the International Space Station and show only once per week.

There is communication with the outside world mainly via e-mail, but with delayed responses to simulate the effects of being so far away from Earth. Even light itself would take a few minutes to get from Mars to Earth.

Sunset seen from Mars, anyone?

Once the crew “lands” on Mars they will conduct two days of experiments before beginning the long journey home.

How big is their living quarters, you may be wondering? Survey says… around the size of a bus. It’s no palatial Tokyo apartment, but it’ll do the job.

And now I have a hankering to play Mass Effect.