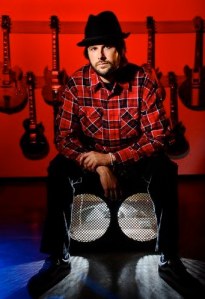 We read a lot of news about amazing companies when they receive financing, have a change in leadership or launch new products, but we rarely get a glimpse into the companies and people that use those products and tools in incredibly meaningful ways. This week’s Speaking Of… is with Roxy owner Nic Alder, son of Lou Adler who’s famous for producing bands/acts such as Cheech and Chong, The Mamas and the Papas and films such as Up In Smoke and The Rocky Horror Picture Show. Lou Adler is also the creator of the Roxy nightclub that Nic now runs and operates.

The Roxy is a 37 year old international brand that was born the same year as Nic and has been the destination for legendary bands through the decades. Nic grew up around musical legends such as Bob Marley, Guns and Roses, etc. and when he took over the club, he had a very different vision for how it should operate. Lou ran a very successful club using traditional promotional tools, but the club was eventually displaced by bigger and hotter venues in different parts of Hollywood and deeply impacted by the move of consumers searching for how to spend their time using Internet tools and ditching old media.

Even though Nic’s father was a naysayer and didn’t approve of Nic’s new ways of operating the business, Nic forged ahead and eventually his father came around once he saw the results. There’s no denying that Nic was correct in changing everything, because if it wasn’t for social media, the Roxy would no longer exist.

Now, I hate the word social media and really, the word social, because it is so overused. When I hear someone say they are a social media “expert”, I vomit in my mouth a little. However, The Roxy is a strong example of how focusing on making your venue/business social really can work and is absolutely necessary in order to be relevant in today’s fast moving world. Nic says that social media, to him, is a mirror of how your business is performing. It isn’t all about reaching out. He’s learned more about his business through real time interaction than he ever could have before. He places so much importance on this as part of his business that he’s hired Kyra Reed, co-founder of Markyr Media, and several other team members who’s sole job is to interact and build meaningful relationships with fans + customers.

Nic’s openness for embracing new widgets, applications and tools actually shocked me. He’ll throw anything against the wall to see if it sticks and he’s hoping more and more startups develop tools that he can put to use in the club. Nic is also thinking about coming to the Bay Area to host a Roxy Presents event where he brings in an awesome band and listens to startups pitch him on ideas. The top idea that wins would get a chance to be featured in his club. If this interests you, please let us know in the comments and we’ll pass it along.

The Roxy was the first venue of its type to use Groupon and they were pretty excited with the results, but experienced some backlash from some of the music community when they did it, but his experiments turned out to be a huge success, drawing in more customers and ultimately benefiting the bands. The venue has almost 140k fans on Facebook and 53k fans on Twitter (the most fans/followers for a venue of their kind online). This is a small number for a famous person or a big brand, but for a venue this is an astronomical number, especially when you consider the club’s capacity is 500 people.

This fan base they were able to build isn’t just local. It’s global and it caught the attention of Facebook. They published a case study this week to show how effective their ad campaigns have been. The community they have built has absolutely changed how they do business and most importantly, has made them profitable and sustainable once again.

I went down to LA to get a tour of the Roxy and was invited on a journey through what they call the “Social Strip”, which is a group of businesses that have banded together in order to help one another. You might think, “ahh, well, isn’t that nice?!”, well, it is, but business traditionally wasn’t done that way. The businesses on the Sunset Strip saw themselves as competition and refused to work with one another. What changed? Well, Twitter changed them.

The Roxy was the first to come online and they did one simple act that changed the history of entertainment venues on the Sunset Strip. They said hello and welcomed a fellow club when they started their Twitter account and gave them a shout out and a retweet. They started being social online with their neighbors. Eventually, they all met in person and shared their financial woes and banded together to help one another. Businesses in the Sunset Strip coalition include the world renowned 200 person venue The Viper Room, The Comedy Store and House of Blues and they are adding new businesses every month. When one venue is closed, they cross-promote the other venue and so on, which ultimately increases the happiness of their shared customer base.

The Sunset Strip almost died, but now people travel across town to experience a night of fun at these venues and we have Nic Adler’s determination and faith in Twitter, Facebook, Groupon and Topspin to thank. He put 3 years of continuous effort into using these tools, even when early signs didn’t pay off and eventually reached a tipping point that saved his business. Pretty cool and I think you’ll enjoy the interview with Nic Adler and Kyra Reed below: