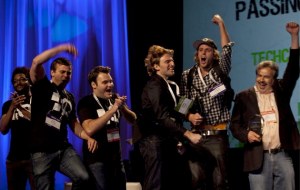 TechCrunch Disrupt winner Qwiki has closed its $8 million series A financing, which I first reported a couple weeks ago when it was midway through the round. Now we know the investors, and it is a very interesting group. The largest investor who led the round turns out to be Eduardo Saverin, the early Facebook co-founder who was pushed out of the company but walked away with enough shares to make him a billionaire. Saverin watched Qwiki’s demo at Disrupt streamed over the Internet from Singapore, where he now lives.

Saverin reached out and met with the founders, and they clicked.

Joining Saverin in the round is Jawed Karim (the third co-founder of YouTube and an investor in Qwiki’s previous $1.5 million seed round), Pradeep Sindhu (the co-founder of Juniper Networks), the Greylock Discovery Fund (which is run by Reid Hoffman), Lerer Ventures, Tugboat Ventures, and Contour Ventures. (Felix Venture Partners, which was mentioned in a related SEC filing, is creating a pooled fund for some of the individual investors).

It is telling that a hot startup like Qwiki went with a wealthy individual as a lead investor instead of a venture capital firm. The funding is extremely founder-friendly, with Qwiki management retaining full control over the company. No voting board seats were given to any of the investors. However, Saverin will get an observer seat on the board, along with seed investor Pejman Nozad. The voting members of the board are co-founders Doug Imbruce and Louis Monier, along with the primary seed investor Bobby Yazdani. Other seed investors include Shervin Pishevar, Keith Rabois, Elad Gil, and Mike Brown.

A lot of the excitement around Qwiki is because of its ability to generate media on the fly that combines text, audio, and animated photos. The company is still in private alpha. Now that it has closed its round, the next steps are to open up the service beyond the alpha and launch an iPad app, which is in the works. “The iPad app is better than sex,” boasts Imbruce. Qwiki’s highly visual presentation of information lends itself to big, touch screens. He also wants to make it easy for developers to incorporate the Qwiki format into their apps.

Below is the Disrupt demo that convinced Saverin to invest: