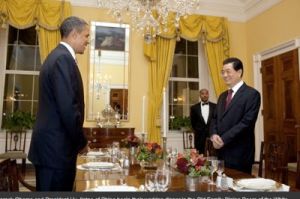 Today, President Barack Obama and Chinese President Hu Jintao revealed, at a press conference in Washington D.C., conclusions from their latest round of meetings that have taken place this week at the White House. The two world leaders have met eight times since Obama took office.

Excerpts from their speeches relating to environmental issues follow below. A full transcript of today’s press conference is available at Whitehouse.gov.

In their respective speeches, President Obama addressed the environment many times, while President Hu barely touched upon these issues directly. Instead, Hu highlighted his country’s willingness to be more collaborative and open in its handling of environmental and related trade issues.

Aside from other humanitarian, economic and geo-political security goals, the presidents said their countries’ wished and plan to: spur innovation and production of clean tech and energy; reduce pollution and curb climate change; and generally keep the flow of exports, including clean-tech related products, between the two nations robust and fair.


The U.S. is now exporting “more than $100 billion a year in goods and services to China, which supports more than half a million American jobs.”

This week, the U.S. and China “completed dozens of deals that will increase U.S. exports by more than $45 billion”

China’s investment in the U.S. increased by several billion dollars through deals announced this week that deal with: machinery, software, aviation and agriculture.

China’s new U.S. deals will support an estimated 235,000 American jobs, many in manufacturing.

As China proposed at the Nuclear Security Summit in 2010, with U.S. blessings, the country will establish a nuclear “center of excellence,” to help “secure the world’s vulnerable nuclear materials.”

The U.S. will cooperate with China on science and technology initiatives to advance agriculture and industry, including: a U.S.-China clean energy research center; joint ventures in wind power, smart grids and cleaner coal.

The U.S. wants to ensure that the “government procurement process in China is open and fair to American businesses,” especially vis a vis intellectual property protection.

Steve Ballmer of Microsoft pointed out to Obama and Hu, this week, that an estimated one customer of every 10 in China is actually paying for Microsoft products.

The U.S. and China are the two largest energy consumers and emitters of greenhouses gases, in the world.

Both Obama and Hu agree their countries have the “responsibility to combat climate change by building on the progress at Copenhagen and Cancun, and showing the way to a clean energy future.”

The U.S. and China “agree[d] to strengthen consultation and coordination on major issues that concern peace and development in the Asia-Pacific region and in the world,” including: the Korean Peninsula, the Iranian nuclear issue, climate change and others.

China and the United States will…promote denuclearization of the Korean peninsula in Northeast Asia.

China plans to “work with the United States and other countries to effectively address global challenges, such as meeting the climate challenge, energy and resource security, food security, public health security and serious natural disasters.”