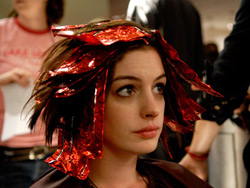 Some very important Batman news for your Wednesday afternoon. It seems that Anne Hathaway, who showed actual acting chops in Rachel Getting Married, will play Catwoman in the upcoming Batman movie, The Dark Knight Rises. Tom Hardy, one of the actors in director Kevin Nolan’s non-Batman movie, Inception, will also be in the movie, playing the role of Bane. And here I thought Bane was some jack-up, roided-out weirdo, whereas Hardy is rather normal-looking.

Nowhere in today’s release is there any indication that Nolan plans to cave into fan pressure and bring in The Riddler.

You’ll recall that prominent Batman fan and co-host of Sirius XM’s Ron & Fez Show, Fez Whatley, had promised never to see another movie until, or unless, Nolan put The Riddler in the movie. With no Riddler in sight, Whatley’s protest continues unabated.