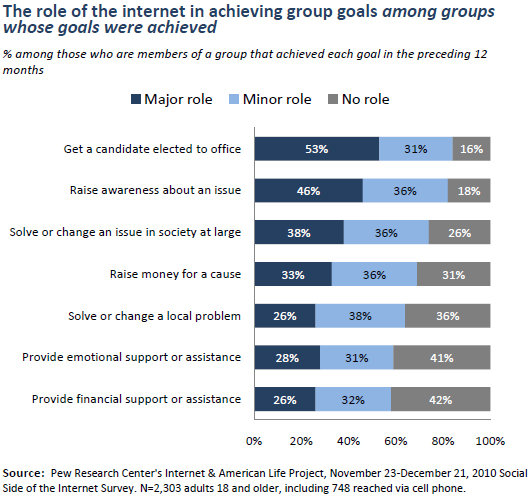 Conventional wisdom holds that fans of the Internet are introverted losers with few discernable social skills who gain pleasure from being backward and apolitical. However, according to a new study by the Pew Internet & American Life Project, conventional wisdom is wrong.

The study, based on interviews with 2,303 adults aged 18 and older, found that 80% of Internet users are active in voluntary organization or real world groups compared to 56% of non-Internet users. Of these same Internet users, 53% felt that social media helped them get a candidate elected to office while 46% believe that the Internet plays a major role in getting the word out about a cause.

The Pew Report is focused on online groups and it says, in short, that social media involvement is helping people join groups, thereby negating some of Putnams “bowling alone” circa-2000 social estrangement theories. It seems that instead of joining the PTA and maybe participating in a pot-luck, Internet users ascribe far more power to their groups than earlier generations. In fact, 65% of the respondents replied that they believed that the Internet was an excellent source for learning about and attending rallies and meetings in the real world.

What does this all mean, on the aggregate, besides suggesting that given my Internet usage that I should be getting out more? Well, it seems that the Internet, contrary to popular opinion, is making us closer and more connected. This is good news but is also ascribes to the Internet a power over political and group events that it may or may not have. After all, the Internet is a medium of communication that simply reduces the cost of reaching thousands, if not millions, of people. Hosting a party or a political rally is easy when you can reach a few million folks, whether it’s electronically or through the printed page. Less popular groups, say the “Grannies Who Love Headbanging” group on Yahoo, however, will still remain unpopular. The Internet does not guarantee popularity but it does augment it.

I, for one, intend to attend some more physical meet-ups with other people. That is right after I upgrade my Mac Pro and maybe play a little Civ V.
Study Page