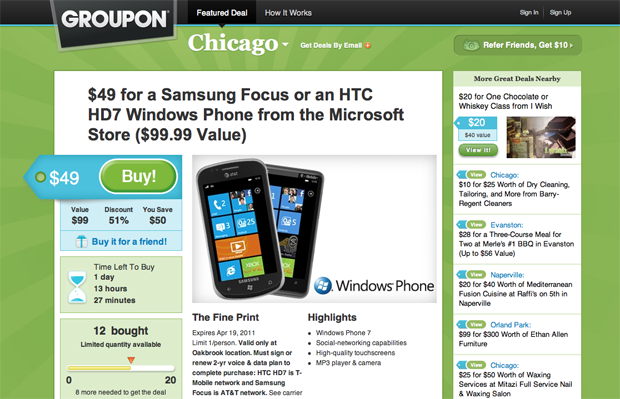 I’m almost rooting for Windows Phone 7. I mean despite positive reviews from critics the phone has apparently had a hard time catching on, most recently suffering through reports that it was less popular than Windows 98 in terms of traffic referrals. WP 7 has been on the market for around three months and while execs are not talking sales numbers past the factoid that 1.5 million were sold in the first six weeks. It doesn’t seem likely it will catch up to iOS and Android anytime soon.

Maybe that’s why the Microsoft store in Oak Brook, Illinois has decided to offer a 51% discount on the Samsung Focus and/or the HTC HD7 Windows phone through Groupon? True, Groupons are primarily lead generational and great for business in some cases. But, with 50% of  revenue here going back to Groupon, I can’t imagine this is something we’d see a mobile market leader like Apple or Google resorting to.

Most telling detail? It took until around 12:30 pm CST to sell enough (20) to clear the deal. Let’s hope this doesn’t go the way of the Kin.