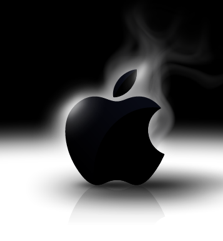 Apple has had a rough couple of days. Yesterday, CEO Steve Jobs announced a medical leave of absence. As a result, the stock plunged today before rallying back to close down just over 2 percent. But this should cheer everyone up. Apple has just announced their Q1 2011 (their holiday quarter) earnings — and as many anticipated, they’re massive.

How massive? Well, coming off its best quarter ever in terms of revenue ($20.34 billion in Q4), Apple was projecting $23 billion in revenue for the quarter. The Street, meanwhile, recognizing that Apple always lowballs these numbers, thought revenue would be more like $24.38 billion. The actual number? $26.74 billion.

Earnings per share had been pegged at $5.38 by the street (well ahead of Apple’s $4.80 estimate). The actual number there was $6.43. Net quarterly profit, meanwhile, was $6 billion — well above the record $4.3 billion Apple did last quarter.

Apple also sold 4.13 million Macs and 19.45 million iPods during the quarter. The Mac sales were also a new record and were up 23 percent year-over-year (though a little below what some had been projecting). iPod sales, meanwhile, were down 7 percent year-over-year, continuing their decline.

Gross margins also continued their trend of being slightly off what they were in the year-ago period. This quarter they were 38.5 percent versus 40.9 percent a year ago. This likely has a lot to do with how well the iPad is selling — a device which Apple priced fairly low compared to their normal margins.

Jobs as quoted in the release on the numbers saying, “We had a phenomenal holiday quarter with record Mac, iPhone and iPad sales. We are firing on all cylinders and we’ve got some exciting things in the pipeline for this year including iPhone 4 on Verizon which customers can’t wait to get their hands on.”

Apple is projecting $22 billion and earnings per share of $4.90 for the upcoming quarter.

Below, find my live notes from the earnings call:

Q: How do you make sure you have enough iPhones?

TC: As I mentioned last quarter, we made a very bold bet on taking iPhone capacity to 14 million. Previously it was in the 8-ish range. In the past quarter it was now over 16 million. We’re working on increasing this further. But it takes time. We’re thrilled to be coming to Verizon. We’re going to do everything possible to get the iPhone into as many hands as possible.

TC: It’s just getting going. But we’re thrilled with the million sales in such a short amount of time.

Q: How comfortable are you with the availability of iPhones and iPads? Shortages?

TC: On iPad, we increased dramatically last quarter — we expanded in number of countries. We’ve be over 60 countries soon. We feel good. With iPhone 4, I also feel good, but it’s not enough. We do still have a significant backlog. We’re working around the clock to build more. I feel great that demand is so high. But I can’t predict when supply will meet it. We think Verizon will be huge.

Q: What about Asia Pacific growth?

TC: Of Brazil, Russia, India, China — we several years ago targeted China as our top country. The numbers have been staggering. It’s mainland China, Hong Kong, and Taiwan. $2.6 billion from that area alone (up 4x from the prior year quarter). Korea has also been a very good market for us. iPhone and iPad are big there. Several other Asian countries doing very well. Japan by itself, the revenue is up 80% year over year. That’s stunning. We’re placing more and more resources in these areas.

Q: Long-term business planning. How far out do you guys plan? Product roadmap?

TC: That’s a part of the magic of Apple. I don’t want anyone to know our magic, so they don’t copy it. In my view, Apple is doing its best work ever. We’re all very happy with the product pipeline. Steve has driven this. “Excellence has become a habit.” We’ve done outstanding in our Mac business — 19 quarters straight of growing faster than the market. But we still have a low share. There’s still huge opportunity there. We have a low share in the handset market too. Huge opportunity there too. And incredible momentum there. iPad just got started — it’s a new category. Almost 15 million sold so far. I don’t know what to predict. We believe it’s a huge market. We’re in some great markets. We feel very confident.

Q: How many more iPhones could you have sold?

PO: You can’t run the experiment both ways. We couldn’t make enough. We would love to make more.

Q: Can you talk about what components were better in terms of price last quarter? What about next quarter?

TC: We expect favorable pricing for DRAM next quarter. Some prices for raw material is increasing due to the worldwide economy getting better. For other commodities, we expect things to fall in pricing as they normally do. Last quarter, we saw a favorable pricing trend. That helped us.

Q: Which component areas are you making investments in?

TC: I don’t want to give that out. I don’t want the competition knowing. We design components where we believe we can innovate — like the A4 chip.

Q: Is there something about the iPad going forward that would make it hard for margins to rise?

TC: Margins consist of a number of factors. You can’t really take on product and speak about it in accurate terms. We’re confident in the guidance.

PO: We shipped a lot of iPads last quarter and margin is pretty good.

Q: What about iPad competitors?

TC: There’s not much out there as you know. There are two kinds of groups today (in the market) — the ones using a Windows-based operating system. They’re big, heavy and expensive. Weak battery life. Need keyboard or stylus. From our point of view, customers aren’t interested in that. Then you have the Android tablets. The variety shipping today, the OS wasn’t designed for a tablet — but Google said this. So you wind up having the size of a tablet that’s less than reasonable. Or one that’s not even a real tablet experience. It’s a “scaled-up smartphone” – that’s a bizarre product in our view. Those are what is shipping today. If you do a side-by-side with an iPad, some enormous percentage are going to pick the iPad. We have no concern there. In terms of next generation. There’s nothing shipping yet. So I don’t know. “Today they’re vapor.” However, we’re not sitting still. We have a huge first-mover advantage. And a huge user advantage from iTunes to the App Store. Huge number of apps and an ecosystem. We’re very confident entering into a fight with anyone.

Q: Move to iPhone non-exclusivity has had no impact on ASP. Will that be the same in the U.S.? More CDMA carriers?

TC: I don’t anticipate the ASP decreasing, no. In terms of other carriers, we’re always looking. When we move from exclusive carrier to dual carrier, overall, our growth has changed and our market share has increased. That doesn’t mean in every country, it’s all different. We’re thrilled to be working with the Verizon team. We’re also happy about the multi-year non-exclusive deal with AT&T still.

Q: Why only one carrier in China?

TC: We always are looking at opportunities to grow. But remember we are constrained on iPhone 4.

Q: Can you give updated thoughts on the Mac side? And what about the upside of the iPad and cannibalization.

TC: What we saw in the Mac was 23% growth — we grew almost 8 times the market rate of growth. Every region outgrew the market, led by Asia-Pacific. That was up almost 10 times the market. We did significantly better than the market in all the major regions. Was there an cannibalization? “Honestly, I don’t know for sure. But yes, I think there is some cannibalization.” But I also think there’s a halo effect. It’s what we saw with the iPod and iPhone. “If this is cannibalization, it feels pretty good.” If our products do cannibalize the PC market, remember we have a low share still. So the other guys lose a lot more. We don’t worry about it here. The iPad team works on making their product the best. Same with the Mac. Both teams think they can continue to grow.

TC: Part of the magic of Apple is that there aren’t high walls among product groups. If one has a great idea, it gets spread around. With the iPad, people love instant on. So the MacBook Air incorporated that. That’s just one example, but there are plenty. It can start on the iPhone, the iPad, etc. I think Steve said it great — if the Mac company and the iPad company were separate, what would the Mac company build to compete with the iPad? The MacBook Air, I think.

Q: Do you have data on new people to the brand buying iPads?

TC: Of course we have that data. For iPhone, the number looks different because we’ve been shipping it for a while. iPad is now moving mainstream. That data needs to settle a bit still. We’re introducing a lot of people to Apple that haven’t been with us before.

Q: What about revenue outlook? Will Verizon help?

PO: We’re working hard to increase supply of iPhones, but it will take some time. In terms of sequential guidance, we’ll still be up huge year over year. We usually have declines after the holiday season though. We’re not sure about iPad though. We’ll see. The iPad was clearly a hot holiday item.

Q: Last call, Steve had a lot to say about Android. Any other observations?

TC: If you look at the iPhone portion, we had record sales — 16.2 million units in the quarter. We believe we could have sold more if we had more supply. We grew faster than the market. We’re continuing to expand countries and carriers. We’re getting big enterprise traction. We have the highest customer satisfaction ratings. Biggest App Store. Over 160 million iOS devices now. This is huge. We believe our integrated approach delivers a better experience over the fragmented approach. Look at the number of App Stores out there. People are going to “pull their hair out”. If you see who is on the latest OS, you’ll see we’re always way ahead (was Cook reading TechCrunch this morning?)

Q: What about future products?

Q: What about the MacBook Air? How do you look at that?

TC: The way that we look at it is that it’s a phenomenal part of our growth of the Mac last quarter. The customers love it. We’re really happy with how it’s doing as a starting block. But we’ve only been shipping it for 90 days. We’re just getting going.

Q: What about the consumerization of enterprise technology? The iPhone and iPad at work.

TC: This is one of the “megatrends” going on. It’s more about employees doing what works than everyone using the same thing. You can run your whole business off of an iPad or iPhone. This was unimaginable just a few months ago. The potential is huge. The numbers are already incredible. The iPad only started shipping in April. We already have 80% of the largest companies trying it out at least. Generally enterprise is much slower, much more cautious. But to their credit, they’re seeing it. With iOS, we’ve been focusing on enterprise for a while. It’s paying off. There’s a huge play here for us.