Here’s yet another piece of proof that the next iPad may be coming soon. As Devin pointed out yesterday, there is support for large (perhaps Retina Display) resolution graphics, all tied up in the latest release of Apple’s iBooks app. Now, some new leakage by way of Best Buy, that tells us the new iPad 2 may be right around the corner.

As more Apple stuff is sold in other retailers, it has been easier to keep up on future Apple products by way of the loose lips, more particularly, the lips at Best Buy. What we have here are three new offerings that appeared earlier on Best Buy’s site – though they are magically gone now, probably along with the web producers job. 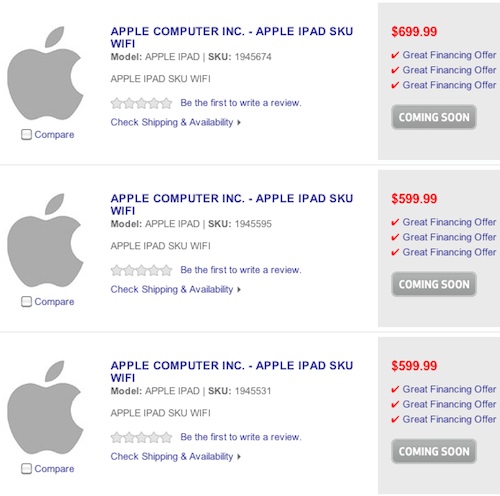 Three new iPads are titled as coming soon, with different SKUs that aren’t recognized. Interestingly enough, two of the iPads are priced the same at $599 (both Wifi), with one at $699. Could there be a Retina Display option for $100? One thing saddens me about these prices: no price drops? Or, could this just be those three Verizon iPads? We’ll have to wait and see.