One of the primary criticisms of electric vehicles is that they have a limited range. Well, yes, they do. And that’s not going to change any time soon. That’s why they’re being marketed as city cars, since (as Nissan is careful to point out in almost every press release) a large majority of drivers go less than 40 miles per day, and almost all go under a hundred.

If you’re driving long distances, an electric vehicle isn’t for you. Just like if you’re hauling lots of lumber, a Civic isn’t for you. But the BBC seems to feel this particular dead horse needs a few more kicks.

They’ve got a show right now with their man Brian Millighan trying to drive a Mini-E from London to Edinburgh, a distance of 400 miles and change. Predictably, he is having trouble making it in good time, what with the long charge times, scarce charging stations, and limited range of even a full battery.

I’m not sure whom this is aimed at. People in the market for an electric car will probably be informed by the dealer that a trip from London to Edinburgh is inadvisable. Electric cars are for in-city driving, trips to the suburbs, grocery shopping, taking the kids to school. They’re not for making cross-country journeys. Hell, I wouldn’t take my car on a cross-country journey. 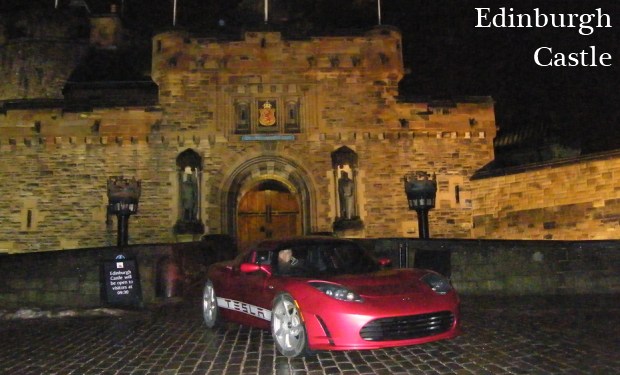 At any rate,Tesla decided the show was something of an unfair slander, and decided they’d send their own guy in a Roadster, for the show Fully Charged. What do you think happened? With a longer range and quick-charge capability, the Tesla had no trouble doing it in a day. David Peilow left around 6:30 in the morning, and arrived late that evening, presumably passing up the BBC team sometime in the afternoon.

Of course, the Tesla costs far more and is a completely different class of car (to say nothing of being totally impractical for everyday use until the Model S comes out). But if the BBC can do a mini-series this ridiculous, the other side gets to make an equally biased showing. The final score is really BBC: 0, Tesla: 0, since no one should be driving their EV 400 miles in a day, but both go to show how important it is to consider the purpose and capabilities of the vehicle you’re driving.