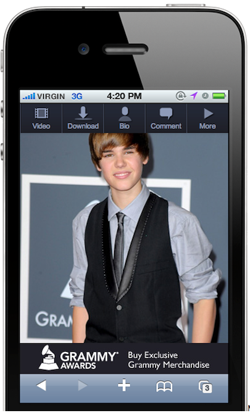 Mobile QR platform ShareSquare launches in beta today with the announcement that they’ve already got 150K out of a 500K seed round under their belt, from angels Paige Craig, John Frankel of ff Assett Management, Jeff Miller and Roy Rodenstein of Hacker Angels.

In the same space as Likify and Mofuse, ShareSquare is a QR Code creation platform specifically for music and entertainment brands. With ShareSquare’s CMS, artists and promoters can deck out branded merchandise like posters, promos, flyers and even bumper stickers with QR codes corresponding to a custom HTML5 web app (see a mockup one for Justin Bieber, to the left).

Fans with a QR code scanner like RedLaser, can then scan the code to check out related content such as MP3s, music videos, contests and, eventually, make purchases.

The ShareSquare CMS also allows realtime placement and by media (i.e. billboard vs. poster vs. sticker) tracking analytics for QR codes as well as something ShareSquare founder and Founder’s Institute graduate Mattias Galica calls “Like Lock,” where fan Facebook “Likes”unveil special access to prizes and exclusive content. Content is monetized through ads.

On a trial run for six weeks, ShareSquare has been working successfully with Hollywood agencies and studios like William Morris Endeavor and Disney. A QR campaign for artist Mitchel Musso reached 2,500 posters, 10,000 packaging stickers and over 181 shopping malls nationwide.

Gallica explains the challenges of the space,“Only geeks recognize what a QR code is. The big challenge in the space is that QR codes have a ton of things that you can do with them. Sharesquare is disciplined enough to focus on two verticals.”

Indeed, taking the entertainment route might be a winning move for the L.A. based company which will also be doing band leaderboards at SXSW, “We’re looking to see what the next couple of months brings us,” says Galica.

Readers interested in taking us ShareSquare on their 500 free invite offer can register here, using the code TCRN500.