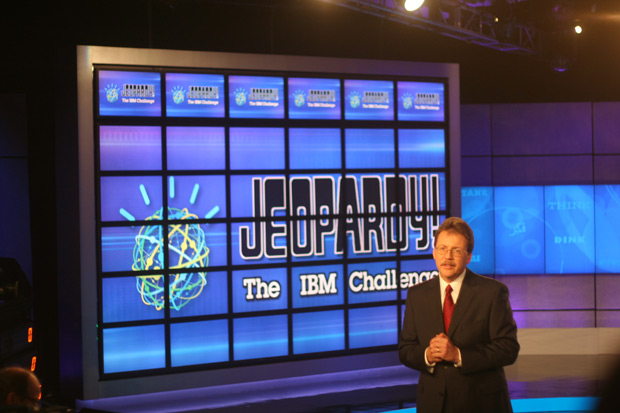 Greetings, fellow humans. Nicholas here live from IBM’s Watson Research facility in upstate New York where I’ll be witnessing the absolute latest in IBM’s artificial intelligence, a fine robot named Watson, take on past Jeopardy champions Ken Jennings and Brad Rutter. Just a live blog for now—pics and video to come afterward. I have but two hands. Feel free to refresh every 8 seconds for the next few minutes or so because nobody told me the Scribblelive password.

11:05am: IBM shows a video explaining why it’s damn near impossible for a robot, no matter how complex, to play a game like Jeopardy well to any degree.

11:10am: The video continues to explain Watson’s evolution. IBM hopes to “revolutionize” the field of AI, in the process changing the world forever.

11:15am: IBM explains why a game like Jeopardy is much harder for an AI to pull off than something like chess because Jeopardy depends on the nuance of human language. You need to be precise, you need to know what you know.

11:20am: Just more discussion on why AI is terrible for Jeopardy. My hope is that IBM is merely trying to set expectations low so that when Watson destroys his human counterparts it’ll be all the more shocking. And for the record, I’m on Team Watson today. I, for one, welcome our AI overlords. Look how helpful SHODAN was!

11:21am: The executive producer of Jeopardy takes the stage and calls this a “great adventure.” He explains that tomorrow’s match will be an exhibition match, and much of the proceeds will go toward various charities. IBM will give 100 percent of its winnings to charity while the two humans will give up 50 percent.

11:25am: The exhibition match starts, and Watson has won the first two questions~!

11:31am: Alex Trebek has joined us. He confirms that since Watson can neither hear nor see he will not be able to ask him any end-of-round interview questions. 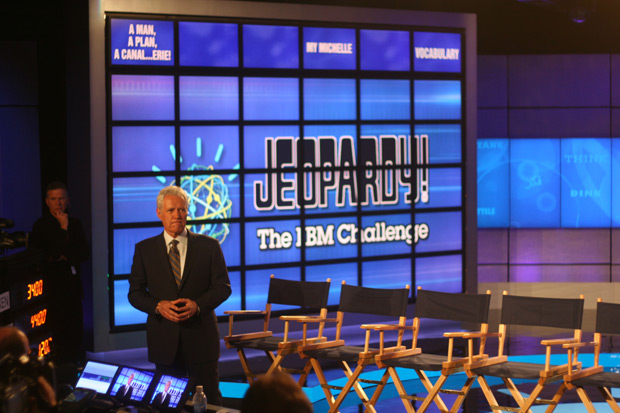 11:32am: IBM confirms that Watson is not connected to the Internet at all; all of his “knowledge” is hosted on several local databases.

11:35am: IBM says Watson, hardware-wise, is all off-the-shelf components, with the addition of IBM’s homegrown software, of course. Watson also only works in English.

11:40am: Alex Trebek has pretty great comic timing. He gives some long-winded answer about how hard it was to put Watson together, but that he’ll be available for purchase on eBay when the tournament is over. Just the manner in which he timed that transition, well done to him.

11:45am: Ken Jennings say that you can’t “psych-out” an AI like Watson, so it will alter the way he has to play the game. Watson doesn’t have emotions but he knows that humans have emotions. We’re doomed~!

11:48am: IBM tries to explain some of the real world benefits of something like Watson, saying that he can read all of the world’s medical files in seconds. Something like that would certainly help speed up this nation’s glacial healthcare document-sharing.

11:55am: Someone in the audience asks Brad and Ken if they’d be happy to see Watson win if only because it will further the human spirit, further the human experience. A sort of, hey, look what we built. Brad says, well, he’d be happy, but maybe not quite yet! Ken says we’re extinct!

11:56am: IBM believes it can “truly save lives” with the technology that powers Watson.