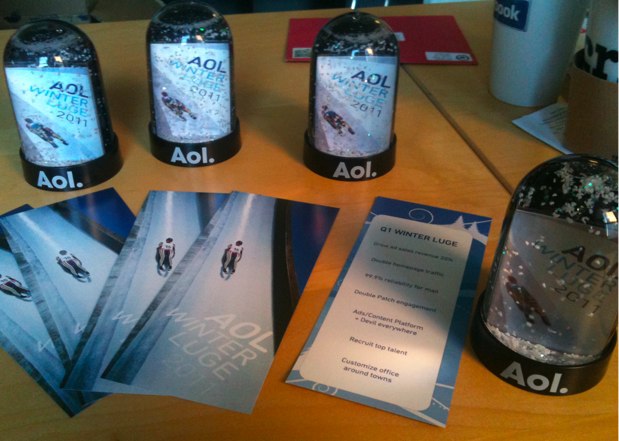 Around here at AOL/TechCrunch, they tend to keep us out of the loop on corporate strategy because they know we’ll post any old memo we find. So imagine my surprise to find a box with AOL snow globes and first quarter stretch targets sent to my office in New York City (which is not at AOL’s headquarters, by the way, but the same office I’ve always had because, well, they don’t really want me in their building—despite being an AOL employee, I can’t even get an AOL ID to enter unannounced). This box has been sitting around since the holidays, and inside is a little motivational package with five AOL Winter Luge 2011 snow globes and bookmarks/postcards (see photo above).

On the back of the postcards are the company’s goals for the first quarter dubbed “Q1 Winter Luge.” Some of these have been reported before, like doubling homepage traffic, which in and of itself would be huge. But there are others too, including growing ad sales revenue by 20 percent, doubling engagement on the local Patch sites, organizing around “towns” (we are in Tech Town!), recruiting top talent, and expanding the Project Devil ads, which replace clutter on the page with one big ad incorporating different interactive elements like video or maps.

So while the news today was about how AOL is outsourcing sports, health, and real estate—some of the content areas where it is not so strong—the bigger strategy revolves around these goals. While there was no other information in the package other than the cards and the globes, it seems clear to me that these are very much stretch goals but ones worth striving for. In case you have trouble reading the goals in the photo above, here they are—and below that another interpretation of the Winter Luge at an AOL party (photo cropped to protect the not-so-innocent, but note the “AOL 2011” engraved into the side of the ice luge): 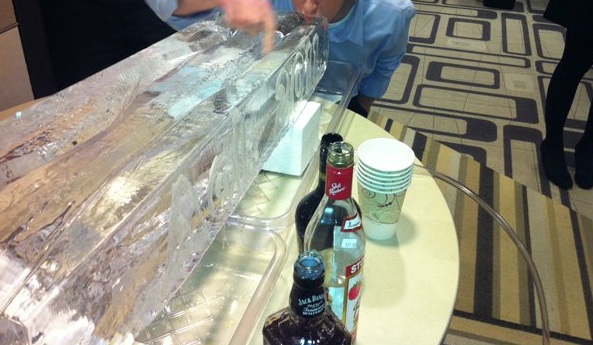