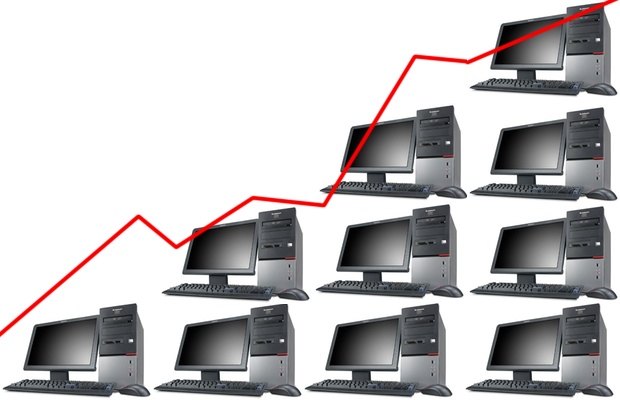 The latest numbers for worldwide and US computer shipment sales have been made available by research group Gartner, and the results are about as interesting as they usually are; that is to say, a little. 2010 was a hard year in some ways, perhaps most so in that netbook sales, which boosted PC sales hugely in 2008 and to a lesser extent in 2009, have pretty much hit the wall. Tablets, or to be precise the iPad and the promise of other tablets, have done their work in taking a bite out of the cheap-PC market, though as many will likely point out in the comments here, they are very different devices. Nevertheless, the iPad has dented netbook sales, and as tablets mature, that trend will likely increase.

Apple’s portion of the US pie has increased quite significantly: a 23.7% jump brought them to a total of 9.7% of all computers sold in the country this last quarter. Why are more people buying macs? That’s a more complicated question than it sounds.

I’d like to give some credit to the iPad, which may have taken quite a few people off the fence, but at the same time, many people might have bought an iPad instead of upgrading their current mac. It would take a separate survey to establish whether that’s true, and unfortunately, I don’t have enough minutes on my phone to make 3,000 random phone calls to iPad owners. So it’s a mystery for now, but the end result is that Apple is on the rise.

As usual, HP is on top, but it’s losing ground to Lenovo and Toshiba, who seem to be eating up all the new growth. Hopefully the HP webOS slate and new notebook lineup will convince consumers that it’s okay to buy from the big guy.

The next year will be clutch for PC makers. Tablets will increasingly replace netbooks and other portable computers, and the all-purpose hub for storage, media, high-power processing, and so on, will be further marginalized (though it’s still got plenty of life in it). The market will become large enough and diverse enough that tracking it won’t be a matter of tracking “iPad” and “other.” Total volume for tablets will be 20-30 million at least.

At the same time, Intel’s new Sandy Bridge platform and the AMD Fusion APUs will make ultraportables and notebooks far more attractive and practical than they were last year, so you can expect a bump there too. Desktop sales, not so much. At least, that’s my take. You can read the report and choose your own adventure here.