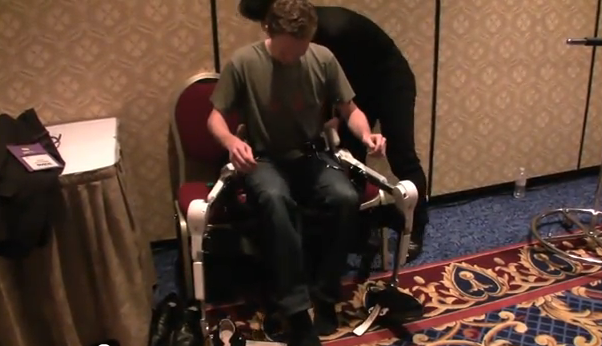 The so-called HAL-5 is probably the most advanced of the robotic suits designed to help elderly or disabled people walk out there. Made by Japan-based Cyberdyne, it enables handicapped people to walk around and lift heavy objects almost effortlessly – by thought alone.

I’ve seen the spectacular exoskeleton in action several times in Japan, but never got around to wear one. But tech journalist Evan Ackerman did (during the recent CES), as the first American ever.

The way HAL-5 works is that it transforms brain signals sensed through the skin into motion (Ackerman had a sensor on each thigh plus two on his waist). HAL-5’s battery pack lasts for over 2.5h on a single charge.

In the video below, you can see Ackerman wearing HAL-5’s legs, which weigh 15kg in total and support their own weight (the full suit with arms weighs 8kg more). It looks like he’s pretty impressed, and he doesn’t seem to have problems walking (I previously heard of “serious” users in Japanese hospitals complaining about HAL-5 steep learning curve).