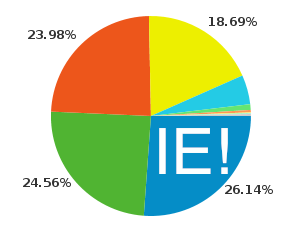 In late November of last year, we noted a changing of the guard: Chrome had become the most-used browser amongst TechCrunch readers, ending the four year reign of Firefox in the pole position. And since then, Chrome has actually widened its lead. In the past 30 days, it’s a full 2 percentage points ahead of Firefox now. And that lead continues to grow. But something really odd happened last week. Chrome wasn’t number one. And neither was Firefox. Instead, it was Internet Explorer.

You might not think that’s a big deal considering that IE is still by a fairly large margin the most-used browser overall. But as long as we’ve been keeping track of stats for TechCrunch, it has never been the top browser here. In fact, it has been number four for quite some time. And it’s normally about five percentage points behind number three: Safari. So for it to surge to number one is a real oddity.

We’ve written about this before; being on AOL’s homepage can lead to a massive surge in traffic depending on where you’re featured. And if we’ve learned one thing from our new parent, it’s that its users love IE. I mean, really love IE. Digging further into the data, almost all of them were using IE (with nearly none using Chrome).

Read into that what you will. The aging giant, etc. But clearly much of the rest of the web is going the other way.

Certainly, part of this AOL/IE love affair has to do with the fact that AOL has some deals with vendors to make their page the default homepage of the browser built-in to Windows: IE. We saw that time and time again during that week, as some strange HP redirect URLs sent traffic our way.

Who knows, maybe with IE9 coming out later this year, AOL user’s love for IE will end up showing them as ahead of the curve. But after the past decade of IE, that’s a big maybe. Something tells me Chrome is going to retain the overall crown for some time.