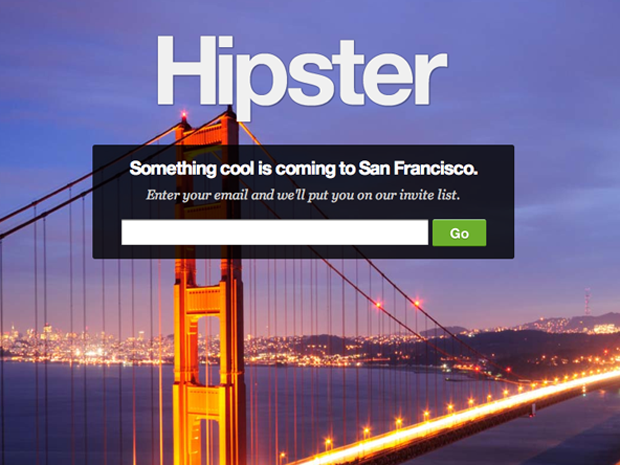 Is it just me or is everyone and their skinny jeans wearing, MGMT-listening mothers a hipster nowadays? Nowhere is this more evident than in tech (thanks Twitter). And behold, the latest sign of the tech hipster-ocalypse, a startup actually called Hipster.

The company is in “stealth” mode and asking people not to say what they do publicly. But they’re pimping themselves hard on Hacker News, offering “earlier access” if you invite 3 friends. Of course.

Already the YCombinator thread has some hard-hitting questions, “Isn’t the key to being a hipster never using anything marketed at hipsters?”

Well not exactly. Just look at hipster emporium Urban Outfitters, you can never mock their weird products because you can’t tell if it’s all a big ironic joke or not. To wit. THEY HAVE TO KNOW, RIGHT?

So is naming your startup “Hipster” genius or terrible? Well, it’s a precarious dance, if there’s a dash of irony then genius, but if it’s in the long run viewed as an attempt to be cool (a.l.a late 2000s MySpace) than you have failed.

Says founder Doug Ludlow on the choice of name:

“I feel that the term “Hipster” has been used so frequently in recently years, that it seems to have lost virtually all meaning – its kind of like a blank slate to project whatever ‘Hipster’ image you want.  We’re now left with an easy to spell, memorable name that makes most people laugh.”

So an extremely unfortunate name may be an ultimate win. Aol’s Ben Roodman owns the domain Unicornfarts.com if anyone out there is looking for worse.