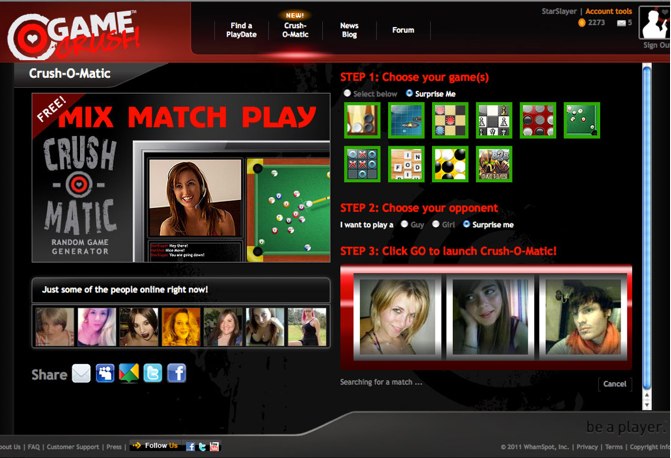 TechCrunch Disrupt finalist GameCrush is launching its own take on the Chatroulette-like experience today with Crush-O-Matic. The new service is a random game generator where users simply click “Go!” and automatically get matched up with another user in a two-way cam-enabled game session.

As we we wrote in our initial review of GameCrush, the startup aims to help the millions of male gamers out on the web hook up online with a gaming buddy of the opposite sex for a fee. On GameCrush, gamers can browse the profiles of “PlayDates”, which is the term used to refer to the women on the site.

Each profile includes the woman’s interests and commonly played games, and of course a gallery of photos are featured front-and-center. Users can message the PlayDate and see if she’s interested in playing a game with him.

Crush-O-Matic allows users select which games they want to play and the gender of their opponent (though users can opt to make these selections random as well). Then members can click to be matched with a random gamer who they can see and talk to while playing online games. Once the game is ended, users can rate their opponent, and users with higher ratings get rewarded with priority matching.

Of course, one challenge for GameCrush, which has raised funding from a number of notable investors, is attracting the smut that appeared on Chatroulette. But co-founder Eric Strasser says that the site’s registration requirement, user profiles and a user rating system help prevent this type of clientele from interacting with the site. He says that users block or rate other users based on their experience, and low ratings/blocks (i.e. people who are acting inappropriately) are weeded out. He adds that the startup already has an active user base familiar with webcam-enabled gaming which helps in the dynamics of the site.