Nothing speaks to the hearts, minds (and stomachs) of young, urban men than endless rib dinners. Last week, Bro-zine Thrillist launched Thrillist Rewards, a weekly deals site aimed at its audience of city-dwelling males. The top deal is a $29 “Endless Ribs And Beer” meal (normally $55) at Hill Country Barbecue in New York City. It has already sold more than $25,000 worth of these rib dinners, and Thrillist only sent the deal via email to a fraction of its most loyal readers. There are still 8 days to go until the deal expires. Other deals include 55 percent off custom men’s shirts and street fighting lessons.

“We were expecting to start slow and see if there was any appetite for this but it turns out we’re onto something big,” says Thrillist CEO Ben Lerer, “or so it seems. For now rewards will be once a week in NYC with multiple deals delivered at a time, some which we think will drive significant revenue and some which we think will be more about access to exclusive offerings that only Thrillist can secure (with our deep local relationships that have been built over the course of the last 5 years). Plus they’ll all be targeted to our guys, who we obviously know very, very well.”

With Thrillist Rewards, Lerer is moving his online media company more into commerce, a trend he first tried last year when he bought JackThreads, a group-buying site for dudes. Thrillist Rewards will bring deals from restaurants and retailers directly to the Thrillist audience. Thrillist typically takes a 30 to 50 percent cut of each deal. If it works out, Lerer will expand to other cities soon. 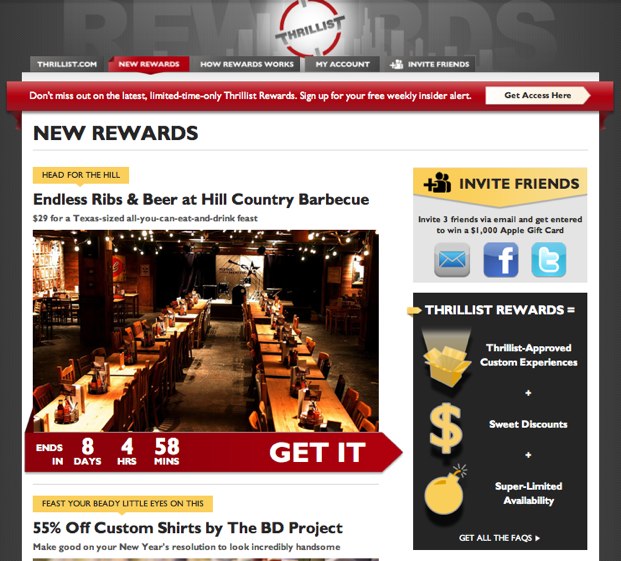