As we saw teased before CES, the Star Wars Trilogy (along with those other ones) is indeed to be re-released on Blu-Ray in September (you can pre-order now). The fan relationship with this franchise is perhaps the most complicated one in the entertainment world, for various reasons, and while I have no doubt that the new release will see millions of sales, it’s a legitimate question to ask whether this is the film my parents watched in 1977, and which I have perhaps never seen.

I mean, I’ve seen all the movies, but the process of keeping a movie alive for 30, 40, 50, or more years is a complicated one, especially for one that pushed the technical boundaries of filmmaking at the time. In contemplating this, I ran across this somewhat old but absolutely fascinating article about the preservation and restoration of the series.

Not everyone is sensitive about the poorly-tweaked colors and added special effects we saw in the re-releases and DVDs (I am). We all know that Han shot first, and that the Sarlacc isn’t supposed to look like Audrey II, but the restoration was more than that. The actual film was cleaned, awkward optical effects were smoothed and aligned, minor errors were corrected, and the film was re-scanned. It was an expensive and labor-intensive endeavor, not just an ego trip by Lucas.

The re-releases for other major films, like the Godfather, have been more painstaking and preservative, scanning the original film at a seemingly excessive 8K resolution, while the last major scan of Star Wars, for HDTV, was scanned at 1080p. Observe the following chart: 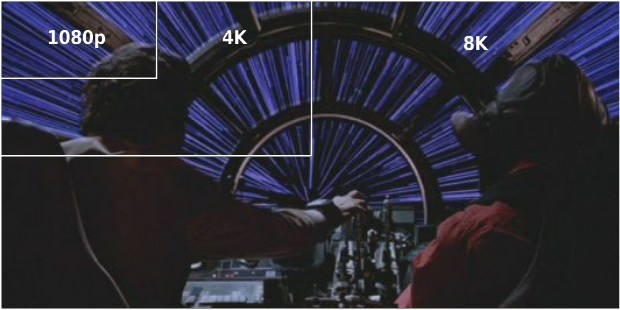 For preservation purposes, it makes sense now to scan at high resolutions, since storage is done digitally and it is costly and damaging to the original film to re-scan. It’s not clear whether Lucasfilm has actually done this, because, as the article I link above notes, the source is not just a few reels sitting somewhere, but the work of several decades and many mediums.

What Star Wars fans want, and almost certainly will not get, is a sort of HD chimaera of the theatrical original trilogy with the minor changes and tweaks that didn’t bother them, minus the major and incongruous updates Lucas shoehorned in.

The ability in digital media to seamlessly change the language, cut, and so on of movies should not be disregarded, though I suspect it will be for this release. What if you could switch on the fly between the “absolute theatrical,” with dirt and old effects intact, the “restored theatrical,” with all the clarification, rebalancing, and effects fixes in, and the “enhanced” version, with new effects, scenes, and so on? Not only would people buy that, they would buy it for quite a large sum, and beyond that, it would show that Lucasfilm is not the soulless media machine people take it for these days.

The chances of this happening are not good. Lucas has taken every chance for re-re-re-releasing the films, and a “complete” edition might simply be a precursor to a more complete “definitive” edition with the aspects I’ve suggested. This new release may be worthwhile either way, since the capabilities of Blu-ray more closely match ideal theatrical conditions, but I wouldn’t expect Lucasfilm to put a cap on this money geyser just yet.

Hey, at least they’re not converting it to 3D. Oh, right.