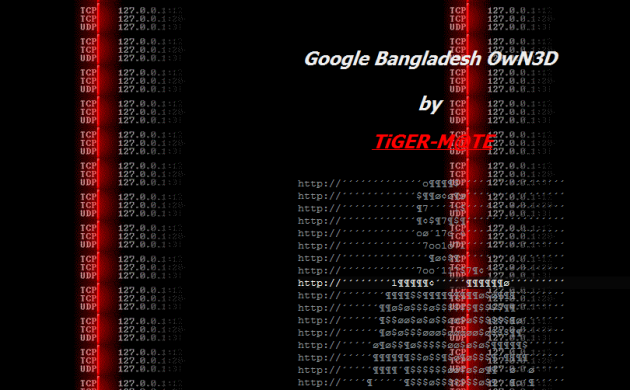 We just got an anonymous tip that Google’s been ‘hacked’ – sure enough, visitors of the company’s Bangladesh search site (Google.com.bd) see a defaced landing page rather than the usual search site. As far as I can tell, www.google.com.bd functions properly, so whether this really constitutes a ‘hack’ is up for debate.

Local Bangladesh media, including online newspaper bdnews24.com, reported on the news as well, quoting a CTO of a local ISP, who confirmed the hack.

Nevertheless, it seems like only a subset of users see the defaced landing page, while others report that they can visit and use the search engine without any hiccups.

According to Zone-h, Bangladeshi hacker TiGER-M@TE has been quite active with defacements lately, and has targeted some high-profile sites in the past, including the local website for American Express and Airtel (video).

Update: Google responds that Google Bangladesh has not been hacked. Apparently this is actually a Bangladeshi DNS registry issue that caused users going to Google.com.bd and other web addresses to be redirected to to another site. The issue is now resolved but may not clear for a while because of cache issues.