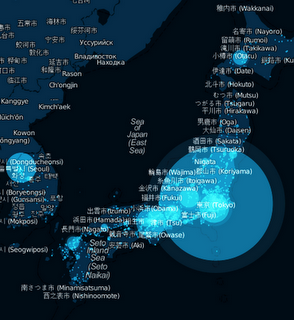 Remember when there were so many tweets during a Steve Jobs’ Apple keynote that it use to cripple Twitter? Then remember when Michael Jackson’s death took things to a whole new level and did the same? Well apparently, neither of those events have anything on New Year’s in Japan.

As they note on their blog today, Twitter saw 6,939 Tweets per second (TPS) four seconds after midnight on January 1st in Japan. This is a new record in terms of TPS — in fact, it more than doubles the previous record of 3,283 TPS set during Japan’s victory over Denmark in the World Cup last summer. “In fact, on New Year’s Eve, that all-time TPS record was shattered more than 68 separate times within a single 3-minute period,” Twitter notes.

So why is Tweeting these big moments so huge in Japan? Twitter writes:

On Oshogatsu (Japanese New Year), Japan virtually shuts down as people spend the day with family and the people with whom they are closest. People make it a point to call their friends and connect with everyone they know to celebrate. With a population of over 127 million, Japanese mobile networks have been known to crash under the strain of this collective cheer. This year, on New Year’s Eve, many people turned to Twitter to celebrate.

But still, Twitter is bigger in the United States and the United States is bigger than Japan, so are we just too lazy to Tweet? No, it undoubtedly has more to do with the fact that we have so many timezones in this country. That means New Year’s is staggered over three (four with Hawaii) different big moments. As Twitter notes, “The East coast time zone alone almost amassed the same amount of Tweets at its peak of 3,000 TPS as the entire world did during the peak moment of the World Cup.” In other words, if the U.S. was one big timezone, we would likely hold the record.

Check out the awesome Tweet density video below for New Year’s. Note the huge glow over Tokyo early on. It’s alive!