The company plans to use the money to construct and begin running a facility near Vero Beach, Florida that primarily turns waste into ethanol. According to a company statement, the BioEnergy Center should begin commercial biofuel production in 2012, providing 175 temporary construction jobs, and 50 additional full-time jobs once the facility is completed.

Based in Indian River County, Florida the facility attained permits last year, and is already being built. It is designed to produce 8 million gallons (24,000 tonnes) of third-generation ethanol for sale. It will also produce an estimated six megawatts (gross) of renewable energy through gasification and heat capture that INEOS Bio will use to run the facility. 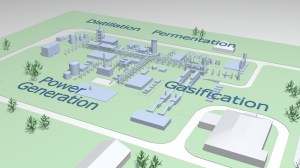 The core technology in this BioEnergy Center involves a patented anaerobic fermentation step through which bacteria convert gases from biomass directly into ethanol. This allows the company to produce ethanol from multiple, rather than single, separated feedstocks.

INEOS Bio will derive and produce biofuel from: construction, forestry, agricultural and municipal solid waste, rather than food crops like sugar or corn. The company hopes to license its technology and help create additional waste-to-fuel plants around the world, especially in rural communities.