Social discovery service StumbleUpon made headlines yesterday when CEO Garrett Camp tweeted out that it had surpassed Facebook in terms of referral traffic on StatCounter.

When a company with 13 million users is outpacing one with 500 million on one specific metric,  additional context is needed to understand exactly what is going on.

I spoke with Camp earlier today about what exactly this recent news means for the company and why StumbleUpon seems to be killing it since August, clocking in about 1.9 million unique visitors in November according to Comscore. The site has served up over 700 million “Stumbles” (referral pageviews to other websites) in December 2010 compared to 400 million Stumbles in December of 2009, according to internal analytics. 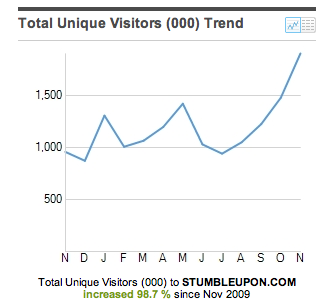 Camp says that the service has been growing at 20% month over month for the last couple of months, partially because it introduced StumbleUpon for the iPhone and Android in August and an iPad app in April. Mobile engagement, which represents 5% of all Stumbles, is growing at 40%. Web-only Stumbling, as opposed to the vast oeuvre of browser plugins and toolbars, is growing at a 25% rate. The site also gains around 500-600K new registered users monthly on average and boasts a 40% daily active user rate.

“We’re becoming a little more useful” says Camp on the recent traffic spikes, “Discovery as opposed to keyword search is just a better way to find information.” Camp also explains the discrepancy between Facebook and StumbleUpon’s end goals in contributing to referral traffic, “Facebook is by design trying to keep you on Facebook, but with us every time you click we’re sending referrals to other sites,” he continues, “like Google our goal is to take you to a new site.”

“The growth curve has also steepened recently because of the introduction of more overtly social features (eg, finding & inviting real-world friends) to complement the less obvious but long-standing social aspects of StumbleUpon (eg, algorithmically determined like-minded users); the improving usability of the service (eg, “show me more from [this domain, topic, user]”; better onboarding); and probably the overall proliferation of content, which has increased the demand for easy-to-use, adaptive curation tools like StumbleUpon (see also Google’s experiments w News & Reader).”

StumbleUpon is also breaking even according to Camp, and at around 65 employees that means revenue is in the ballbark of 10 million annually (When asked if this guess was accurate, Leibowitz told me “You’re not bad at math.” This is not true.). In any case, beating Facebook at anything is a hell of a way to start 2011 strong. Congrats guys.