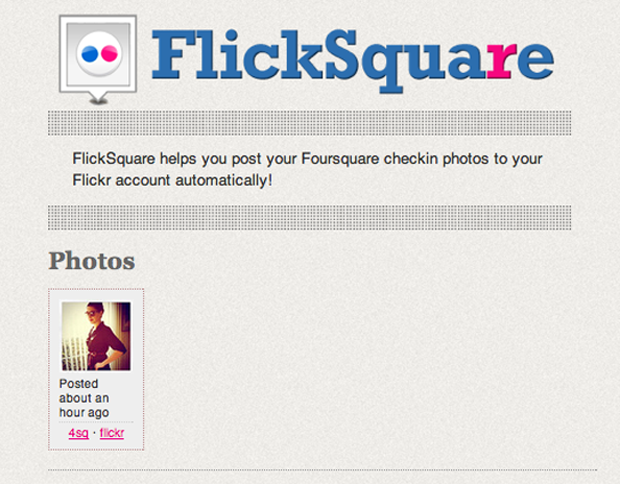 Inspired by a tweet from First Round Capital VC Charlie O’Donnell (“Can someone hack a Foursquare app that cc’s my checkin photos to Flickr?”), developer Benny Wong has created Flicksquare, an app that takes advantage of Foursquare’s recent enabling of photo check-in features, allowing you to also send your Foursquare photos to Flickr.

While Foursquare gave lip service to working on the Flickr and Facebook export capability a couple of weeks ago, Wong has beat it to the punch. Along with being able to automatically publish photos to Flickr, Flicksquare also includes data like the name of venue checked-in to as well as a link to your Foursquare check-in on Flickr’s photo info. Wong even included Foursquare’s machine tags when About Foursquare made the request.

You can keep tabs on the photos being sent through the Flicksquare site and turn the service off if you plain old get tired of it. Wong says he’s taken aback by how much positive response the service has engendered since its launch, “Im surprised its being so well received; I spent an afternoon throwing this together since I’m in NY and I was snowed in on Sunday.”

Thanks to Wong and Foursquare, you can now check into the Snowocalypse 2010 venue with a photo and simultaneously send that photo to Flickr. Hurrah.