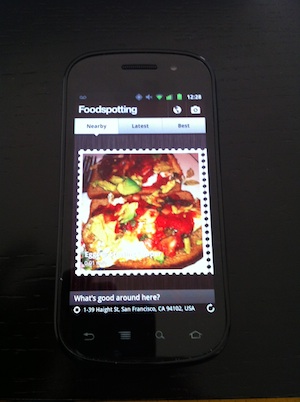 It was exactly one year ago today that Foodspotting sent out the first test build of their app to a few iPhone users. Today they’re finally doing the same for Android — and they’re opening the beta up to everyone.

Yes, the application which allows you to take pictures of your favorite foods and share them with a community of foodies is finally moving beyond the iPhone. When we first wrote about the app last March, people were already asking for an Android version in the comments. But the small team had their hands full developing the iPhone version and working on their website. But this past August, when announcing their new round of seed funding, Foodspotting revealed that work had begun on the Android version. And now here it is.

Be warned that it is very much a beta version of the app. As such, they haven’t released it in the Market yet. Instead, you have to turn on the ability to run non-Market apps on your device and visit this link from your Android phone to install it.

And while the app is missing some of the functionality of its iPhone sibling (namely much of the in-app social stuff), it looks very nice and fulfills the main purpose of Foodspotting: spotting food. It also brings the ability to syndicate out your food pictures to Twitter, Facebook, and even Foursquare (their newest integration).

So when you’re pigging out tonight, if you’re an Android user, now you can show the world too!