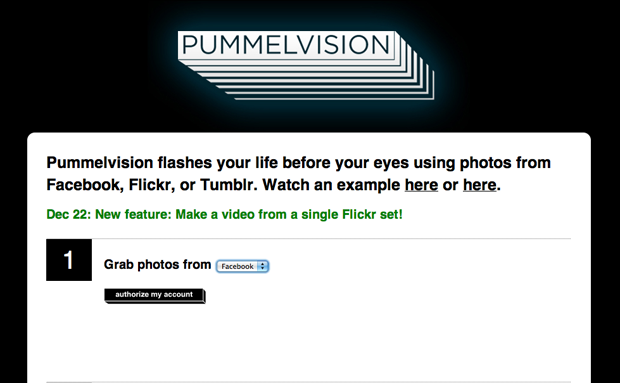 Pummelvision does more than turn photos into video. Created by Vimeo co-founder Jake Lodwick, the service literally flashes your life before your eyes by pulling all your photos from Facebook, Flickr, or Tumblr and exporting them to either YouTube or Vimeo. You also have the option of pulling from a single set if you’re using Flickr.

Lodwick explains the motivation behind the tool, which he says was inspired by a mushroom trip, “I retired from blogging on Tumblr and ran their backup tool. A few days later it occurred to me that I had every image I ever posted sitting on my computer, and it would be interesting to see them as a video. I went into Final Cut Pro and produced this. I found it so entertaining, I thought, I should make a tool that does this for everyone. So I spent a few weeks making Pummelvision”

I have not seen anything else like Pummelvision on the Internet. Lodwick says that he’s seen slideshow tools that focus on “goofy” transitions but nothing that combines speed and sound with a massive quantity of photos.

Lodwick wants to eventually be able to grab photos from anywhere and have the videos export anywhere, and plans on adding support for Picasa, Twitpic, Twitvid and Dropbox. He also is working on customization features in order to be able to change features like speed and music, which was the first thing on my wishlist (you can see the fruits of my Pummelvision efforts here).

The last time we wrote about Lodwick it was because he had a bong in his hands. Nowadays he says he has quit smoking pot and is focusing on “Making cool shit at the intersection between art, business, and technology.” Lodwick is also an investor in MakerBot, Bleacher Report, and Tumblr which are indeed very cool.