The startup, backed by Sutter Hill Ventures, works with builder-contractors to install its proprietary sensors in the ground, and additional repeaters and gateways up in light poles and trees, to make a mesh network. Once an area’s streets are rendered “smart,” they can record and report when cars arrive, occupy or depart spaces (and more).

The sensors, manufactured in Mountain View, Calif., have been installed in about 3,000 spaces through Los Angeles city blocks in Hollywood, Studio City and parts of Chinatown so far reports the chief executive of Streetline, Zia Yusuf. 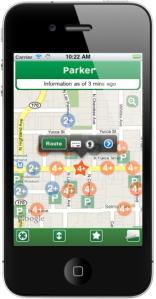 The app itself features: a map of city blocks with color-coded dots to help users quickly see where there are more than four spots, more than two spots, or fewer than two spots available. It also delivers information about parking space time limits, pricing, and whether meters take credit cards or coins.

Yusuf said the company plans to roll out an Android app within the first quarter of 2011. Down the line, he expects the Parker app to deliver more information and features to users such as: the availability of spaces in nearby garages that could be an alternative to street parking; data about spaces equipped with electric vehicle charging stations; or a feature that lets users pay meters or fines by mobile phone.

The CEO quipped ahead of Parker’s release, “You know when people say, ‘Man! I drove around for 15 minutes just looking for parking?’ Enjoy it now. Because that is quickly becoming an archaic or obsolete discussion.”

Los Angeles is not the only city interested in this technology (though it may be the one with the worst smog). Roosevelt Island, New York, Sausalito, Culver City, and Washington D.C. have signed on to use Streetline sensors to better understand transportation in their cities.

Recently, the company announced a partnership with Siemens to develop digital street signs that can direct drives sans smart phones to available parking, efficiently. Until now, Streetline focused on providing data capability to cities, airports and universities. Parker for iPhone is its first foray into consumer markets.