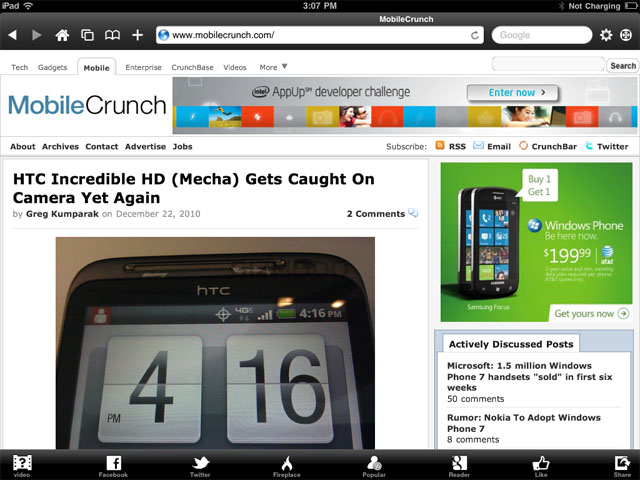 It’s been a busy couple of weeks for the folks over at SkyFire. They launched their Flash Video-friendly browser for the iPhone back in early November, only to pull it down almost immediately to ease the onslaught of users hammering their video transcoding server. Even with that temporary App Store absence, however, SkyFire for iPhone managed to pull in just shy of a million bucks in its first weekend alone.

There wasn’t much time to celebrate, though, as SkyFire had another device in its sights: the iPad. With their first stab at iOS proving to be a pretty friggin’ hot success, it wasn’t a question of if — it was a question of when, and how much. We’ve just been clued in on the answers to both.

According to our contacts at SkyFire, the company will shortly be announcing that the iPad port of their browser has been approved by Apple, after just 7 days in the approval queue. Though the company was staying mostly mum about pricing at the time of submission, I originally guessed that the iPad port would go for just a bit more than its iPhone counterpart — sure enough, the iPad port will cost $4.99 (as opposed to the $2.99 it goes for on the iPhone.)

And for the folks who like that little bit of extra insight: from what I’m hearing, it was quite the mad dash to get SkyFire for iPad approved by today. You see, Christmas is the most important time to be on the App Store, largely due to the influx of new users looking to fill their shiny new toys with apps. But tonight’s the last night to make it happen; after Apple closes up shop this evening, it’s vacation time for the App Store folks. From tonight on through December 29th, the App Store goes into hibernation; no new apps will be approved, and no price changes can happen.

Greg Kumparak is the Editor of MobileCrunch.com. Need to shout at him? Put greg in front of @crunchgear.com. Follow him on Twitter here for good fortune and luck in life (results may vary.)
CrunchBase Information
Skyfire
Information provided by CrunchBase