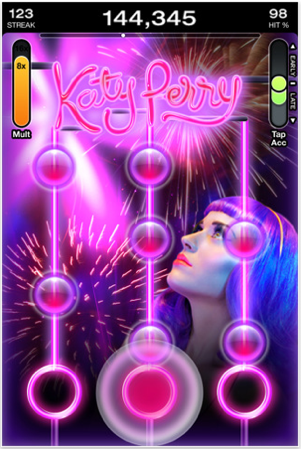 Last night around 11PM, Tapulous released the latest version of what is one of the App Store’s most popular franchises of all time: Tap Tap Revenge 4. 18 hours later, it became the top application in the App Store, marking the sixth time Tapulous has held the #1 spot since the App Store launched in summer 2008 (TTR1, TTR2, TTR3 as a paid app, then again as a free app, TTR3 Boost , and TTR 4). Tapulous founder Bart Decrem says that this game launch has been “twice as fast, and twice as big” as TTR 3 was in the same time span.

The launch of Tap Tap Revenge 4 comes around six months after the company was acquired by Disney for an undisclosed sum.

Decrem, who now serves as SVP and General Manager for Disney Mobile, says that the game is seeing around 25,000 downloads per hour right now, which is on par with what it saw on Christmas day last year (app downloads see a major spike on Christmas as people try out their new iPhones and iPod touches, so expect this number to surge even higher this year). Decrem says this is the fastest any of Tapulous’s games have ever hit #1, and it may be the fastest growing game ever (though he doesn’t know that definitively).

Given that the company has such a large existing install base — Decrem says Tapulous is coming up on 50 million total downloads between all of its applications — Tapulous can more easily gain traction with a new game than a small-time developer could, because it can send promotions to existing users. But Decrem says that Tapulous is only tapping into around a third of its viral channels so far (namely, interstitials in TTR3), and that it will save its other big guns like emails and push notifications for once the initial buzz for the game dies down.

Among the new features introduced with TTR4 are support for Apple’s Game Center, higher resolution graphics for the iPhone’s Retina Display, a stronger social component where you can ‘Like’ songs and challenge users with similar tastes, and a wider selection of both free and premium music downloads.

Decrem says that Tapulous has some other big news coming up: in January it will be announcing its lineup for the leadership team of Disney Mobile based out of Palo Alto. Decrem also says that both Tapulous and other Disney applications are going to begin incorporating a standard set of analytics and advertising libraries, as it looks to become the App Store’s largest freemium gaming network.