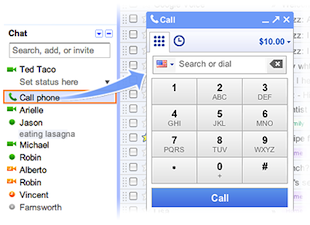 I own an iPhone. I live in San Francisco. As such, it’s basically a total crapshoot as to whether or not I’ll be able to make a phone call in the city. Skype had always been a pretty good back-up solution, but an even better one came a few months ago: Gmail Calling. And now Google has just extended the free period of the feature through 2011. Yes, through next year.

Gmail Calling is great because it exists fully in the browser in an app that I always have open anyway: Gmail. If you use gChat, it’s right below your status message marked with a phone icon and the words “Call phone”. Hitting this launches a dialpad window within Gmail (similar to a chat window) and you can call any number in the U.S. or Canada for free. In my experience, the call quality and reliability have been excellent.

All of this is done by way of a Google Voice plug-in. We were all excited for the desktop version of Google Voice — which we got to test out — but Google decided to go this route instead, and I do think it’s a better idea.

When the feature launched back in August, Google would only commit to keeping it free through the end of the year — so this 1 year extension is great. But a Google representative at the time also told us that they hoped they could keep calls free indefinitely if the margins on international calls could cover the U.S./Canada ones. No word on if that’s the case yet, but again, the 1 year extension is a good sign. It currently costs 2 cents a minute to make calls through the service with dozens of other countries.