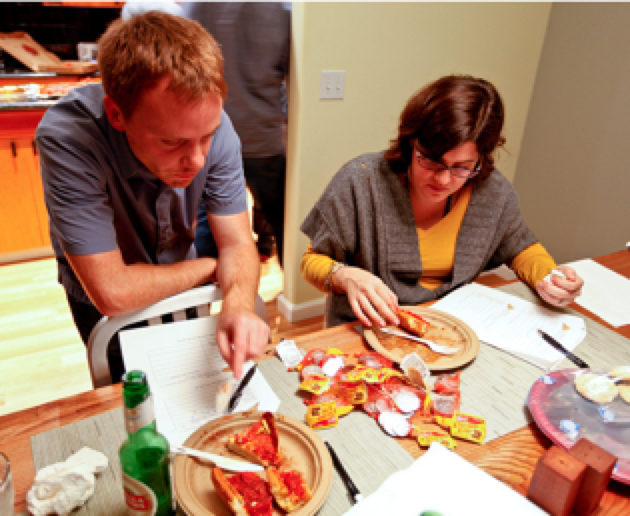 Lots of people argue about which place has the best pizza. But only a geek’s geek would get so obsessed that they spend a whole weekend determining as scientifically as possible exactly who’s right and who’s wrong.

They failed to find common ground. So (of course) they asked a scientist and cognitive psychologist specializing in human-computer interaction to create and conduct an experiment to settle things.

They dragged a dozen more people into the experiment (“entrepreneurs, product managers, engineers, scientists, designers, a pizzaiolo, a librarian and a lawyer”) got to work:

On December 12th, we gathered our 12 testers in total. Entrepreneurs, product managers, engineers, scientists, designers, a pizzaiolo, a librarian and a lawyer rounded out our collection of people from around the bay area; half of these testers identified themselves as those who prefer New York pizza over Chicago. Three cheese Chicago-style pizzas were brought in locally from: Little Star, Patxi’s, and Zachary’s. The 2 shipped frozen and reheated from Chicago were Lou’s and Gino’s. All these pizzas were of Chicago Deep Dish style—not the “stuffed” variety. Dr. Churchill, who was not taking the test herself, designed a ‘pizza score card’ to measure peoples judgement on each pizza on a 1-5 scale: Appearance, Smell, Texture, Taste, Finish, and Overall-loving-feeling. Each pizza was presented unbranded on a standard pizza board labeled only with a number. Each taster drew numbers from a hat to determine the order in which they tasted pizzas. This helps to control the error of the pizzas getting cold as they sat out.

Which pizza won? Who cares? New York style pizza is superior in every way to the Chicago slop they tested. But it’s absolutely hilarious to see how obsessed these guys get over pizza.