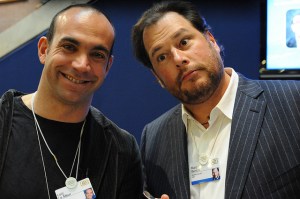 We’re hearing that Salesforce is investing in Seesmic’s next round of venture funding, along with other investors. We don’t yet know how much or at what valuation but the tie up is interesting.

Just a few months ago Mike was saying Twitter deciding to compete with developers had essentially killed Seesmic. That may be true for consumer chats, but enterprise is another matter. And between Yammer’s new round of funding and Salesforce’s Chatter product, enterprise chat is heating up.

Might Seesmic be a spoiler? The two have already been chummy, with Seesmic integrating into Chatter and Seesmic founder Loic Le Meur and Salesforce CEO Marc Benioff appearing on stage together multiple times. We’ll post more details when we hear them.

(Disclosure: This may come as a surprise since Mike is so hard on Loic, Seesmic and the French generally, but he was an early investor in the company.)