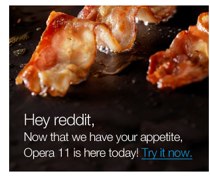 Opera released a new version of its desktop browser yesterday, Opera 11. The new browser shipped with a number of new features, including support for browser extensions and a new tabbing functionality.

It looks like the release was a success; Opera just announced that it saw 6.7 million downloads of the new browser in the first day alone. So how does that compare to downloads of Opera 10? Well, the company says that in its first week open to the public, Opera 10 was only downloaded 1.7 million times per day.

One factor that helped increase downloads, says Opera, is the auto-update feature which sends existing users a message to download the new version of the browser. But the company admits that not every user received the auto-update message. And Opera advertised Opera 11’s release, including a mouth-watering ad on Reddit using bacon as a lure. A survey of people downloading Opera for the first time had 53% of its respondents coming from Firefox, and 43% coming from IE. And none from Chrome?

Opera’s iPhone app saw 1 million downloads in its first day in the app store earlier this year. And Opera just announced that it hit 150 million users worldwide across its desktop and mobile browsers.

For comparison, Microsoft’s beta version of IE9 was downloaded 2 million times in the first two days the browser was open to the public.