Late last week, a handful of TechCrunch staff noticed something strange going on in front of our headquarters in San Francisco: there was giant, creepy-looking chicken pacing back and forth in the street, holding a sign over its head that said “TechCrunch Dont Be Chicken, Check Out DoDont“. Laura bravely went outside to scope out the situation — she returned to say that the guy had already been out there for hours, and that this was actually the second day he’d been walking around TCHQ (nobody noticed him the first day).

So, I did what any other fearless reporter would do: I grabbed my Flip camera and started talking to the giant chicken.

As you’ll learn in the video above, the chicken in question happens to be one of the founders of DoDont, a site that invites users to voice their recommendations on a binary scale: “Do” something, or “Don’t”. Like the pizza at Primo’s? Tell people to ‘do’ dinner there. Hated the service at your local movie theatre? Tell your friends that they ‘don’t’ want to go there. You can vote on the ‘Dos’ and ‘Don’ts’ you agree with, and you can also see the top Dos and Don’ts for each tag category.

The chicken — whose actual name is J. Brent Large — says that the site is a decision engine (he’s also described it as a “Digg for opinions”). It uses Facebook Connect for signins, and in the near future, he says that it will add support for Twitter integration and asymmetrical relationships, as well as native mobile apps and an API.

Obviously it’s very simple, probably to a fault. Then again, we’ve seen sites with similarly simple propositions take off — Formspring’s ‘Ask me anything’ comes to mind — so who knows. 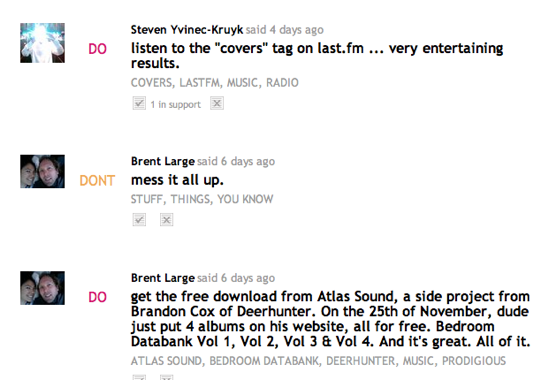 Now, let me be clear. As a general policy, TechCrunch writers have every intention of ignoring any similar shenanigans for the foreseeable future. People try similar stunts all the time and we generally ignore them, but this one took guts and is pretty funny. But everyone else, please use our company submission form and/or tips address.

Here’s a video overview of DoDont: