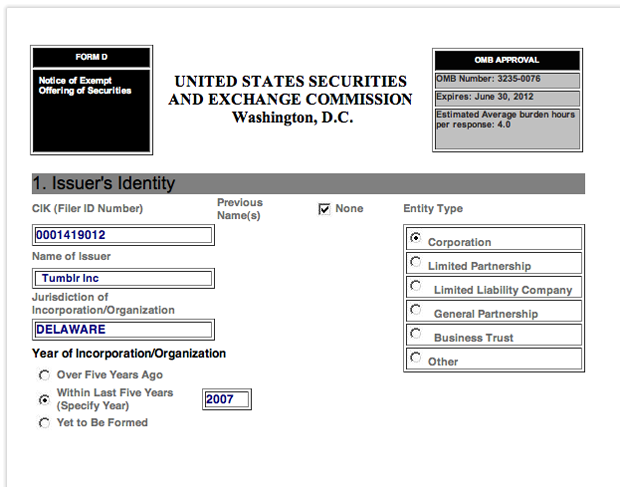 For the past several weeks there’s been reports of blogging platform Tumblr raising a boatload of money. That was confirmed today in a SEC filing with numbers on the Series D round. $25 million to be exact.  According to the filing it looks like Spark Capital, Sequoia and Union Square Ventures participated in the round.

We’ve heard that the post-money valuation is in the ballpark of $155 million. We had also heard that the total amount of funding was $30 million, no word on whether the round was reduced in size or there is just a second tranche coming later.

Tumblr founder David Karp will have plenty of things to spend the money on, Tumblr just opened a new office in New York Cityand hired another four people to bring the total up to 16 people now. David Karp recently told TechCrunch that he plans on expanding the company to 20 employees before the end of the year.

Update: Tumblr President John Maloney tells us that the full round is actually $30 million, as we previously thought and there will be a second SEC filing on Monday for $5 million.

Maloney also gave us the breakdown: Sequoia went in at $20 million, Spark Capital at $5 million and Union Square Ventures at $5 million. You can read more about the company’s plans for the cash in its blog post “Getting ready for 2011.”