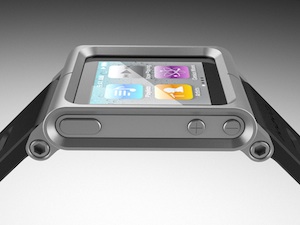 About a month ago, we wrote about how the TikTok and LunaTik multi-touch watch kits were about to become the all-time leader in funding through Kickstarter, the crowdsourced fundraising startup. The project needed over $345,000 to grab the title. Well, it got it — and a whole lot more.

With just about 2 hours to go before the funding closes, the project to turn iPod nanos into watches is closing in on a million dollars in funding. Yes, they’re now way more than double the next closest project in terms of funding through Kickstarter. In total, over 13,000 people have contributed just over $918,000 for the project.

What’s especially insane is that the initial goal for the fundraising was $15,000. Clearly, the project’s creator, Scott Wilson, underestimated demand.

So will it become the first $1 million Kickstarter company? It should be close. More than 1,000 people have pushed the total up over $100,000 in just the past day. “We’ve seen numerous projects rally strongly in their final 24 hours.  We’re unsure if it can make the $1M milestone, but we’re excited about the prospect and we’ll be watching!,” Kickstarter’s Justin Kazmark tells us.

The first batch of watches are set to launch at the end of this month, with the rest coming early next year. You can watch it being manufactured in China here.