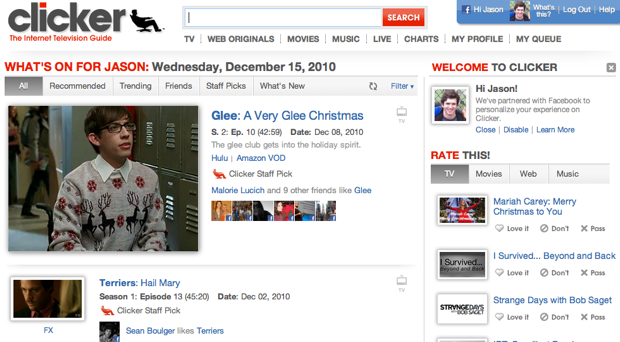 Over the last several months, Facebook has been slowly ramping up its Instant Personalization program, which allows select third-party sites to access your public Facebook data as soon as you visit them, without having to ‘Connect’ to Facebook. Done right, it can be a pretty slick experience, and today Facebook is announcing that it’s adding one more site to the program: Clicker, one of the web’s best resources for finding TV shows and movies online.

It’s a logical integration, and it should help users sift through the vast amount of video content that’s been indexed by the site. After logging in, Clicker told me that I’d probably be interested in the latest episode of Glee, based on ‘Likes’ from 9 of my friends. Good job, Clicker — I happen to be a Glee fan, though the plot lines sometimes me make want to throw my remote across the room (breathe, Jason, breathe). The site is also recommending Terriers based on one ‘Like’ from a friend of mine, which sounds interesting. I’m not sure what to make of the suggestion to rate the ‘Mariah Carey: Merry Christmas to You’ special.

Facebook launched Instant Personalization at its f8 event last April, when it was integrated into three initial partners: Pandora, Microsoft’s Docs.com, and Yelp. The program sparked quite a bit of controversy, in part because it was difficult to opt-out (which Facebook has since remedied, mostly). I think it’s still a bit jarring when you visit a site for the first time in months and it knows who you are, but it doesn’t seem like Facebook’s users mind much.

Since that initial launch (and a few months with no new integrations as Facebook waited for the backlash to die down) Instant Personalization has been added to Rotten Tomatoes, Scribd, and Bing.