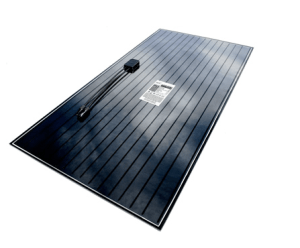 Colorado-based Abound Solar— the makers of cadmium telluride (CdTe) thin-film solar modules designed for use in large solar power installations, versus residential or small commercial systems— raised a $110 million equity round, and secured a $400 million loan guarantee from the United States Department of Energy the company announced today.

One of Abound Solar’s objectives is to produce solar modules that reduce the cost of generating solar electricity within large-scale, grid-connected utility and commercial applications.

According to a company statement:

“The debt and equity financings will enable Abound Solar to expand manufacturing capacity at both its existing facility in Colorado and later at a second site in Indiana, which when completed will create 1,200 new manufacturing jobs…When both plants are complete, Abound Solar will be able to produce more than 840 megawatts of solar modules annually. The company has already begun construction of a second manufacturing line at its Longmont, Colorado facility to increase production rates in 2011.”

A report from GTM Research (The U.S. Utility PV Market: Demand…and Project Economics Through 2015) predicts that: U.S. utilities will increase their investments in solar power generation each year through 2015 to meet states’ demands for solar energy; and installations of solar projects for utility customers could reach about 3,000 megawatts annually, worth some $8 billion over the same period.

Abound Solar (formerly AVA Solar) faces multiple contenders for a piece of this market, including U.S. companies like NASDAQ-traded First Solar (FSLR) which also makes CdTe thin-film solar panels, and SunPower Corp. (SPWRB) which makes crystalline solar panels that are appropriate for use in utility-scale projects and are typically more “power dense,” or efficient than thin-film.

International solar manufacturers like Solar Frontier in Japan, Schott Solar and Sunfilm in Germany, or ENN Solar in China, are also vying to sell their technology to the same type of large-scale customers.