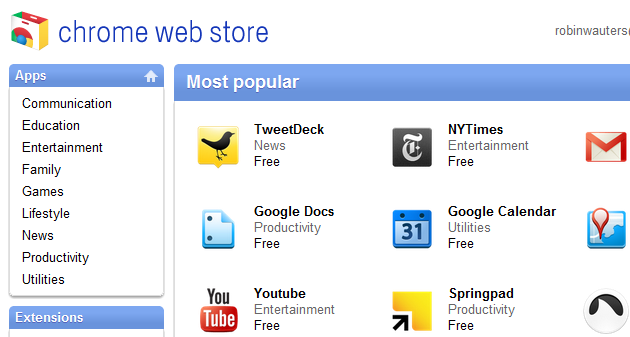 Google publicly unveiled the Chrome Web Store a week ago. Looking at the most popular apps in the U.S. by weekly install numbers, it looks like TweetDeck has fast risen to the most prominent spot on the list, as relayed by the startup’s founder Iain Dodsworth earlier today.

So where are the Google services? Right behind the TweetDeck and the NY Times, it appears.

Granted, most of Google’s ‘apps’ are mere links to the respective Web-based services, whereas ‘ChromeDeck’ is an actual app, but still.

Springpad rounds out the list of the ten most popular apps on the store as the third non-Google service to make the list after TweetDeck and NY Times, with about 35,000 weekly installs (almost a third of TweetDeck’s install numbers).

Obviously, it’s far too soon to draw any conclusions, but it’s certainly a testament to TweetDeck’s huge popularity to see it leading the most popular Chrome apps list, considering the company is primarily regarded as a desktop and mobile client software developer.