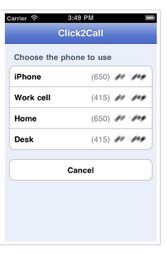 As we wrote a month ago, Google Voice finally arrived for the iPhone after Apple waited 16 months to approve the application. And as expected, the app was a hit with Google Voice and iPhone users. Unfortunately, at the time of launch, Google Voice for the iPhone didn’t support the iPod Touch or the iPad. So today, Google is announcing a new version of Google Voice that will work on both iOS devices.

The new version of the app essentially allows you to use all the features of its iPhone cousin, including the ability to read your voicemail and send and receive text messages. Of course, you cannot make cell calls from the iPad and the iPod Touch. But you can use Google Voice’s Click2Call feature to initiate Google Voice calls with one of your phones.

When you click a “Call button” in the new app on an iPod or iPad, you can select which of your registered phones you want to use to connect the call. Google Voice will call your phone and then connect your call to the contact’s phone number.

Other features of the app include the ability to send callers straight to voicemail via a Do Not Disturb button. And Google has added a “Contacts” button to the Dialer tab to allow you to find your contacts in your address book more seamlessly. Also when you enable Push Notifications within the app, Google will disable Text forwarding for you.

The ability to actually initiate a call from the iPod or iPad is kind of cool, and surely something that could be useful for Google Voice users. Of course, you will have to put down your device and pick up your phone to actually participate in the call.