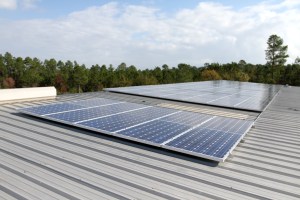 The system consists of solar panel arrays attached to a battery back-up system that will allow the South Bay Communities Alliance (SBCA) Hurricane Response Center to produce its own power, reduce its cost of operations and maintain power in the event of an outage. The system, newly up and running, will produce an estimated 33,500 kilowatt-hours of electricity annually, which should offset close to 100 percent of the center’s electricity use.

The SBCA center was formed by Bayou communities in 2006 after Hurricane Katrina left families there without power, food, clothing, water and protection from the heat.

Paul Nelson, the SBCA’s executive director reported that President Obama’s administration recommended his grass-roots group as a worthy recipient of the project to Elon Musk who (through the Musk Foundation) provided the funds, and SolarCity.

The Coden area is rebuilding from two disasters, today. More than 300 families were still suffering from storm-related home damage and losses when the BP oil spill occurred earlier this year, destroying the area’s natural resources and jobs.

A representative speaking on behalf of SolarCity and company chairman Elon Musk, who is also the chief executive of Tesla Motors and SpaceX, said this project— and others they hope to pursue in 2011— would help people reduce their “dependence on the finite power sources that pollute our air and water and complicate our geopolitics.”