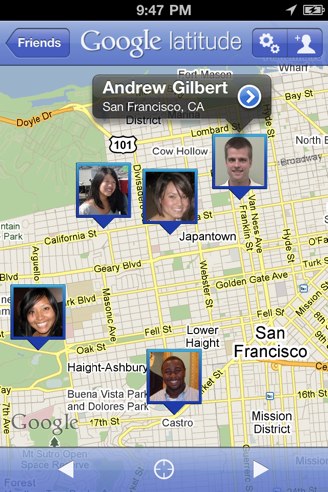 It seems that whenever there’s a discussion around mobile location services, Google Latitude is treated as an also-ran. Foursquare and Facebook Places have been getting most of the buzz, and there’s also plenty of news around SCVNGR and Gowalla. Latitude, which launched in February 2009, rarely make headlines.

But starting today, we’ll probably start hearing a bit more about Google’s location-based service. It’s just launched a full-featured, native application for the iPhone that includes support for background location monitoring — marking the first time that the application has been available for the iPhone in a form that wasn’t severely crippled. Note that this was spotted in Japan’s App Store a few days ago — obviously that was a mistake in the buildup to today’s launch.

Now, Google actually submitted a native Latitude application for iPhone last year, but Apple blocked it and told Google to make it a web application, supposedly to avoid confusion with the Maps app that ships with the iPhone. Of course, a few days later news broke that Apple had also blocked Google Voice, which likely indicates that this was part of an anti-Google trend as opposed to a one-off concern. Now it looks like those issues have been resolved (perhaps with the threat of government intervention).

In any case, even if Latitude had been accepted last year, it wouldn’t have been too exciting, because the iPhone didn’t allow applications to run in the background (that feature was added in iOS 4.0). With this release, Google writes that it has built the app “from the ground up using iOS 4’s new multitasking capability to support background updating”. Which means you’ll be able to turn it on, and let you automatically share your current location with friends as you go about your day.

There’s also a big stat in Google’s blog post: Latitude has more than 9 million people actively using the service across a variety of mobile platforms. To put that in perspective, Foursquare just passed 5 million users (thought it hasn’t said how many are active). I do wonder, though, how many people have set Latitude up and have it running in the background without actually using it to see where their friends are.

Even with the new iPhone application, there’s still the issue of whether people actually like the service. Latitude has a bigger ‘creepiness’ factor than check-in services like Foursquare, because you aren’t explicitly telling the application when to share your location with friends. Yes, you can control exactly what you want to share with each of your friends (you can set it to only share your current city, for example), but it obviously takes work to get everything working the way you want it, and there’s that nagging feeling that you might have messed something up.

That said, I think passive location tracking is the future, at least in some form. My hunch is that we’ll see services monitor your location throughout the day, but that instead of sharing it, it will detect whenever you’ve gone somewhere out of the ordinary, or are near friends, and then prompt you to share what you’re doing (essentially pushing suggested check-ins at you).