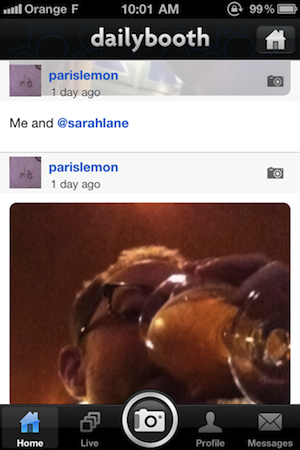 When DailyBooth finally released an iPhone app back in July, it made a lot of sense. After all, the iPhone 4 had just been released and it featured a front-facing camera for the first time — the perfect tool for a service which asks you to take pictures of yourself. Unfortunately, while the idea was right, DailyBooth’s first iPhone app just wasn’t very good. So the completely redid it. And I’m happy to report that version 2 is finally one worthy of your gaze.

While the first app was a basic way to scan DailyBooth and upload simple pictures of yourself, version 2 includes many more of the service’s core features. This includes a live feed, profile views, activity views, messages, following/follower views, friend finding, and “ghosting”.

The first and the last features are really cool. The live feed automatically refreshes as new DailyBooth pictures come in. Not too many iPhone apps utilize this live view, but it works for DailyBooth as pictures are quick scan items — and they come in slightly slower than text-based messages.

The other excellent feature is “ghosting”. A big part of DailyBooth is looking at someone’s picture then mimicking it in the replies. The ghosting feature allows you to easily do this as it shows you a slightly transparent version of the picture your trying to mimic, so you can line yourself up with it.

While DailyBooth could technically be lumped into the latest craze of picture taking apps, CEO Brian Pokorny likes to distinguish it as a “front of the phone” app versus the others which are “back of the phone” apps. Obviously, he’s talking about the camera there.

It is interesting just how DailyBooth users utilize pictures to communicate through images of themselves, rather than of other things. And now they finally have a solid app to do it with. You can find the new app here in the App Store.