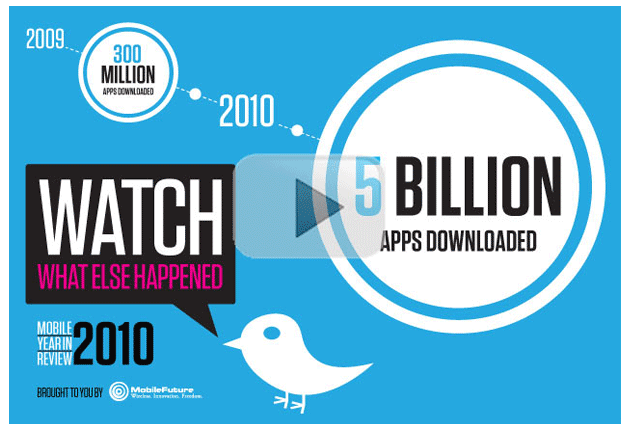 Hello, Internet. Industry group MobileFuture took about 2 minutes and 51 seconds to explain that 2010 was “the year mobile connected the world”.

Fortunately, they are sharing all this information freely by means of a video.

Much of what gets mentioned might be obvious to many of our readers, but it’s certainly nice to have the findings lined up like this. The most apparent trend for 2010: the fast-growing popularity of downloadable mobile applications (from 300 million in 2009 to 5 billion in 2010), and location-based, social networking and video services in particular.

It was also the year of an explosion of data traffic, spurred by the increasing amount of content available for consumption through mobile phones, more capable smartphones and an ever-increasing number of high-end phone buyers. MobileFuture says one, unnamed carrier’s data traffic has ballooned 3,000 percent since 2008.

Oh, and texting is still disturbingly popular an activity, particularly stateside – 3,339 is the average number of texts sent per month by US teens alone.

That and more in the fast-paced Mobile Year In Review 2010 round-up video: