When former Facebook Senior Platform Manager Dave Morin left to begin a new startup, it was a solid bet that it would play nicely with the world’s largest social network. But when Path launched in November, just about everyone on the web was surprised at just how… antisocial it was. Well, maybe “antisocial” is the wrong word. It’s more like “antiviral” — something which most apps feel they need to be to survive these days. What led to this antiviral backlash? The fact that you couldn’t push pictures from Path out to the big social networks like Twitter and yes, Facebook.

As Morin posted to the Path blog tonight, “Path and Facebook are now in an open relationship.” But it’s not the kind of all-out makeout session you might imagine. Instead, Path is taking it slowly.

Right now, you can visit this page to link your Path page to your Facebook account. And while all the social sharing permissions are covered, it appears that Path is currently only using the connection to surface the Facebook friends you have that are also on Path, so you can easily follow them. That’s a decent first step that a lot of people have been asking for. Previously, the best way to find friends was if they were already in your phone’s contact list.

But Morin hints that more Facebook integration is coming. “We’ll be doing more with Facebook’s world class social platform technology to help you build your personal network on Path in the coming months,” he writes.

Last week, Path was the featured App of the Week on iTunes. They also recently rolled out an update to let you upload pictures after you take them.

Update: Path has also just announced that a new version of their iPhone app has hit the App Store, version 1.1. This brings the ability to find friends via Facebook (as mentioned above), a way to communicate to photos via text message or email, and a way to see larger versions of images.

The service has also rolled out a new web interface with a revamped UI. This includes a way to see who has viewed your Path images.

The big thing here is obviously the reply via text message (or email if they’re on an iPod touch). The allows you to click on any picture in your Path stream from a friend and quickly send that person a text message (again, or email).

It’s not quite comments, but it’s certainly an interesting idea. Of course, the reply could be a bit out of context depending on how old the image is, so be sure to clarify why you’re texting your friend with “Nasty!” 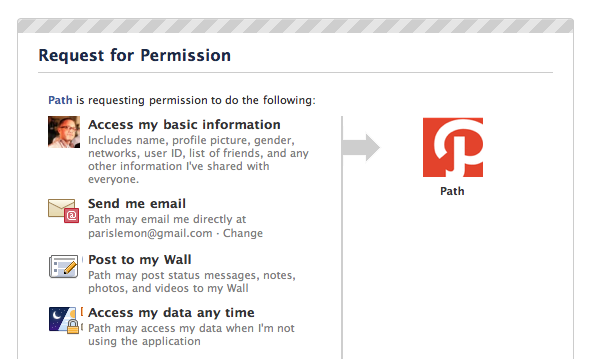