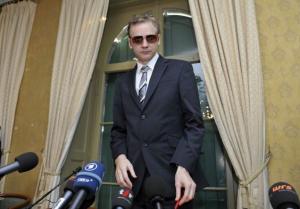 Le Web. I’m still unclear on the unique selling point of Europe’s “leading technology conference”, and yet here I am, for the third year in a row, hanging out in a snow-bound venue four hundred miles from the centre of Paris, watching a succession of American entrepreneurs being interviewed – in English – by journalists who have flown in specially from California.

I’ll say this, though: the food is good this year – really good.

Now, having satisfied my annual obligation to be snarky about Le Web, I’m free to talk about what passes for the big story of the conference, and indeed the biggest story of the world right now. Wikileaks. Specifically, the continuing DOS attacks against companies who are perceived as enemies of Wikileaks.

Judging by the hostile reaction to Paypal’s Osama Bedier yesterday, the audience here in Paris is of a single mind on the subject. Julian Assange is a hero – a paragon of virtuous openness; a flesh-coloured bottle of sunshine, disinfecting the fetid swamp of global diplomacy. Those who would cross him – the Paypals, the Visas, the Mastercards and the EVERY SINGLE GOVERNMENT IN THE FREE WORLDs – are the enemy, and – inshallah – their websites will soon crumble under the crowdsourced vengeance of all of those who cherish our freedoms.

And then there’s me.

I hate Julian Assange. I hate the way he’s posing as a champion of truth and justice whilst hiding in the shadows and resorting to blackmail in a drawn-out attempt to avoid having to answer criminal charges in a publicly-accessible court of law. I hate the fact that he’s trading on a myth that We The People have a right to know everything our governments are saying and doing in our name when, in fact, we elect people to act in our best interests on a global stage without necessarily giving us a heads up every time they want to have an off-the-record chat with a dictator. (If every tiny decision has to be made based on how it will play in public, then we’ll soon end up with a whole load of crowd-pleasing decisions but very little actual diplomacy. Palling around with Chinese leaders or Arab kings might be a strategic no-brainer but it doesn’t play great in the heartland.)

Also, I hate his hair.

But here’s what I hate most about Wikileaks, and what no-one else here seems to be saying: that with this most recent round of leaks, the organisation has actually become a sworn enemy of openness.

The release of a quarter of a million diplomatic cables – documents which have made Wikileaks a top story around the world, and Assange a celebrity – has been variously compared to Watergate and the Pentagon papers. Of course the comparison is ridiculous. Both the Pentagon Papers and Watergate involved scandalous information that almost nobody knew. “Cablegate”, on the other hand, involved cables that were routinely shared between members of the US government and armed forces, and trusted figures from friendly nations.

Thousands – maybe millions – of people had access to the cables – which, as openness goes, is pretty impressive. Hell, even a lowly Private like Bradley Manning – the junior soldier with a grudge against the American military who allegedly leaked the documents to Wikileaks – had access to them. Now, however, thanks to Wikileaks, all of that is likely to stop. What’s also likely to stop is the routine documenting of casual conversations, the candid sharing of opinions between allies – and a whole bunch of other acts of openness which if Wikileaks actually meant a word it said, the organisation should be all for. And for… what? So that millions of us who had no real business – beyond a basic prurient interest – in knowing what conversations are being had behind closed diplomatic doors could feel important. Well, great. Responsible openness’ loss is a few million busybodies’ gain.

But of course none of that seems to matter to the crowd at Le Web who applaud Wikileaks’ Assange and showed their displeasure towards Paypal’s Bedier. All that matters to them is that THE MAN is trying to HIDE SOMETHING, and he’s being assisted by EVIL CORPORATIONS like Paypal and Visa and Mastercard. Possessed by that belief, it seems perfectly right and proper that those corporations should be made to suffer, and those behind the retaliation should be applauded for their denial of service attacks. The fact that many of the “hacktivists” are the same people who share child porn and harass the parents of dead children is immaterial: the enemy of the enemy of the enemy of my enemy is my friend.