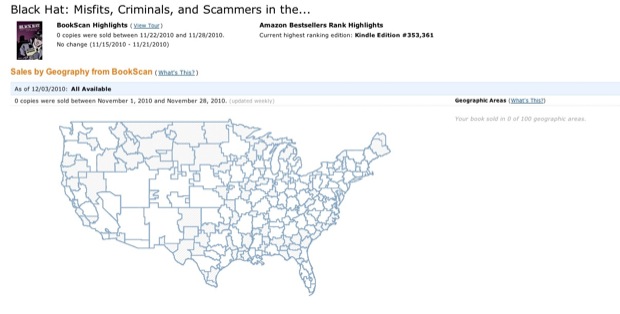 Hear that? That’s the sound of thousands of authors’ hearts stopping mid-keystroke as they open up their Bookscan numbers and keel over dead of disappointment. Amazon just added Nielsen Bookscan numbers to their Author Central pages, the pages authors use to add content to the Kindle/Amazon book store and, more important, track their book sales on Amazon.

Nielsen offers geographical breakdowns of sales for the past few weeks. In my case, above, I haven’t sold a book since Bush was president so I have no data. However, folks who are just releasing books right now can see how many and where their books were sold, with the obvious caveat being that these statistics are often woefully inaccurate. These woefully inaccurate stats are extremely expensive, as well, costing multiple thousands per year for access, depending on the package selected. That said, agents and the industry treats this data like pure extruded gold mixed with ketamine so what Amazon has done is fairly impressive.

Basically, this puts a modicum of power in the hands on the authors. “You had to beg your agent or editor to provide you the sales figures and you can imagine how effective that was. So authors generally had no data whatsoever on how their books were selling,” said one author I spoke to. “I used to call BookScan and tell them I was working on pieces for publication and they wouldn’t even give me the sales data. They’re more responsive to traditional, big-time media, but still, it’s tough to get the figures.”

What does this mean for authors? Well, it shows authors how few – or how many – copies they’re selling. That’s a huge deal. Second, it lifts the veil on the secretive world of publishing and book distribution. It also shows how few books really sell through the physical distribution chain any more and proves how much of a gamble the book business really is. Regardless, it’s a step in the right direction in terms of transparency – until, of course, Nielsen releases Bookscan Plus or something equally expensive.